Like the architect of grand buildings such as Arley Hall in Cheshire, at Artichoke our purpose is  to produce rooms of heritage quality.  It is our mission to ensure every room we design and make will form a long term part of our clients’ houses for generations.

There have always been designers and makers with the same mission as ours, and their interiors are still looking as breathtaking today as they were when first installed, all those years ago. Their legacy creates an emotional and aesthetic connection to Britain’s cultural identity.  It is our inspiration.

In this new series, we will tell the story of English country house interiors that we admire.  Our special thanks go to Christopher John Photography for allowing us to use his photography from Arley Hall, the subject of our first brief biography of a building.

Arley Hall was built by the Warburton family in the mid 1400s.  Originally it was  a U shaped timber framed structure surrounded by a moat.  The three story building you can see in the photo above was added in 1570 and was left largely unaltered, falling into disrepair until the late 18th century, when the house was encased in redbrick and neo-classical stone facades.  It was at this time that Arley Hall’s housekeeper was Elizabeth Raffald, who went onto become the writer of one of Britain’s most successful cook book at the time, ‘The Experienced English Housekeeper.’ 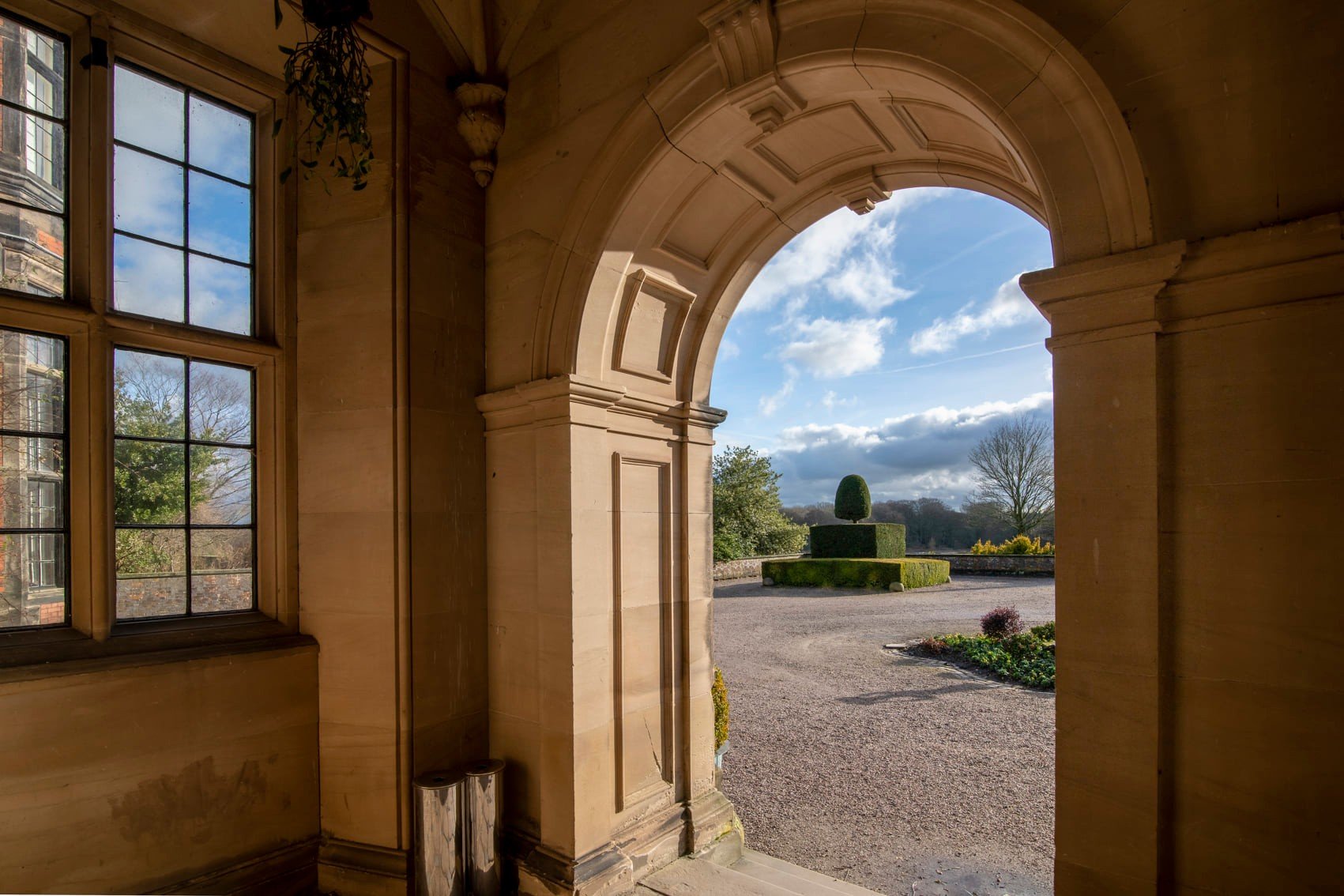 These late 18th century architectural interventions turned our to be unwise and unsympathetic, and the house continued its decline until 1813 when it was inherited by the then 8 year old Rowland Egerton Warburton.  At the age of 21, charged by a decent inheritance, Rowland decided to completely rebuild Arley Hall using modern building methods, but in the Jacobean style as a nod to his ancestral past and the source of his wealth. 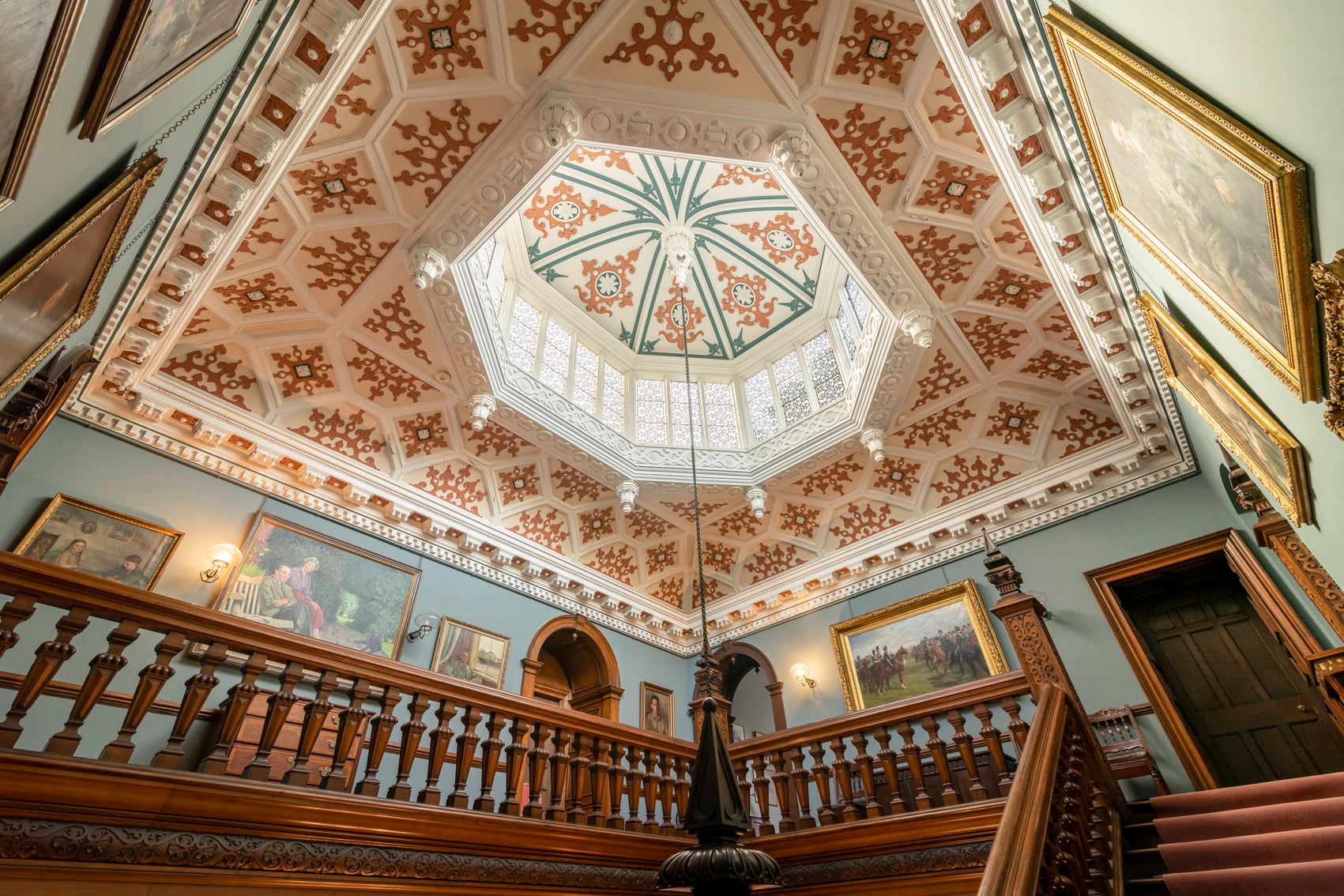 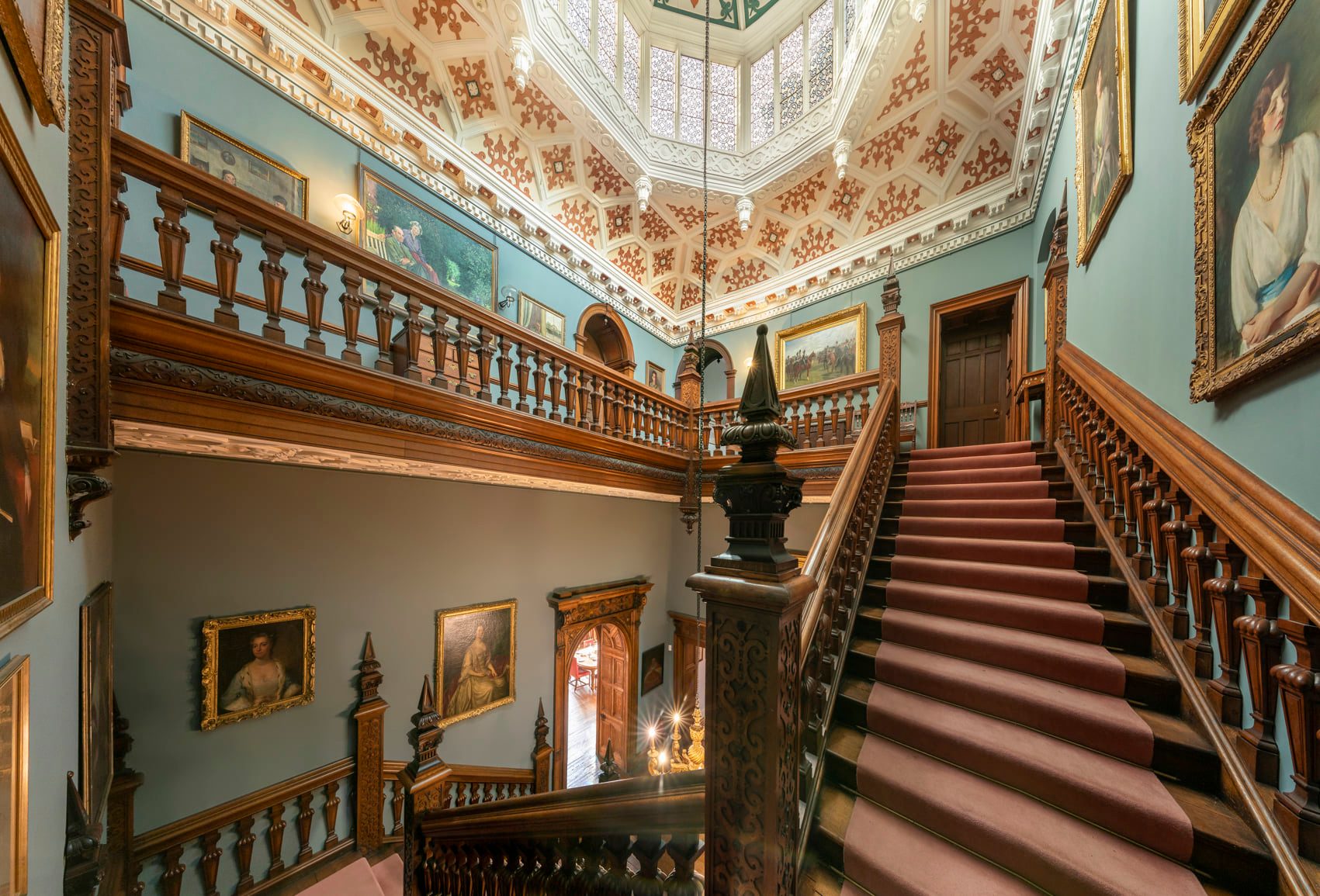 Rowland chose George Latham, a local architect, to design the house.  Latham had trouble achieving planning permission.  His first neo-Jacobean submissions were dismissed. Finally, his Elizabethan concepts were approved, but on the proviso that every feature in the house had an exact original Elizabethan replica elsewhere.  With this large task at hand, both Egerton-Warberton and Latham embarked on a lengthy study trip to investigate Elizabethan detail before starting the first phase of the work in 1932.

The Library at Arley Hall 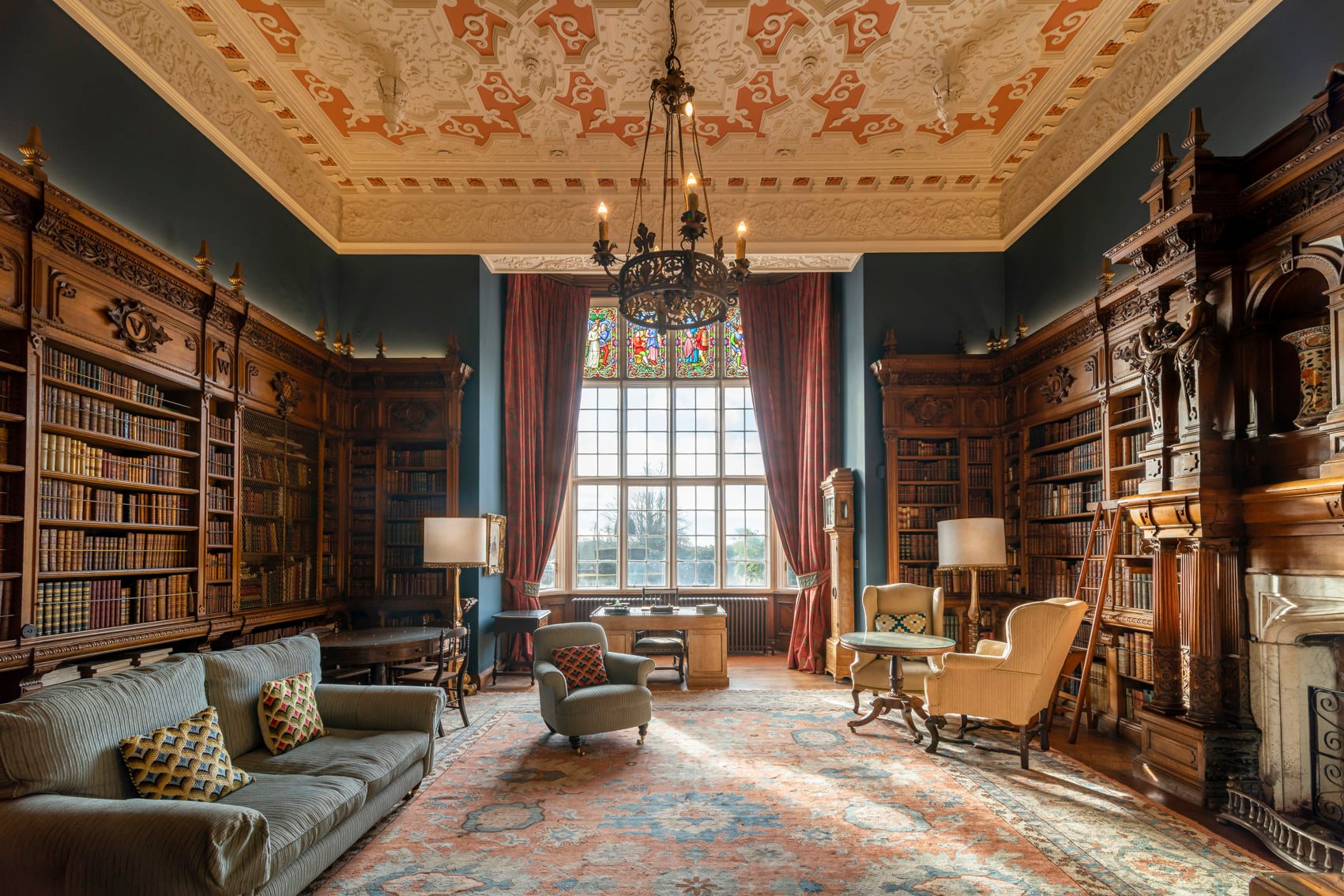 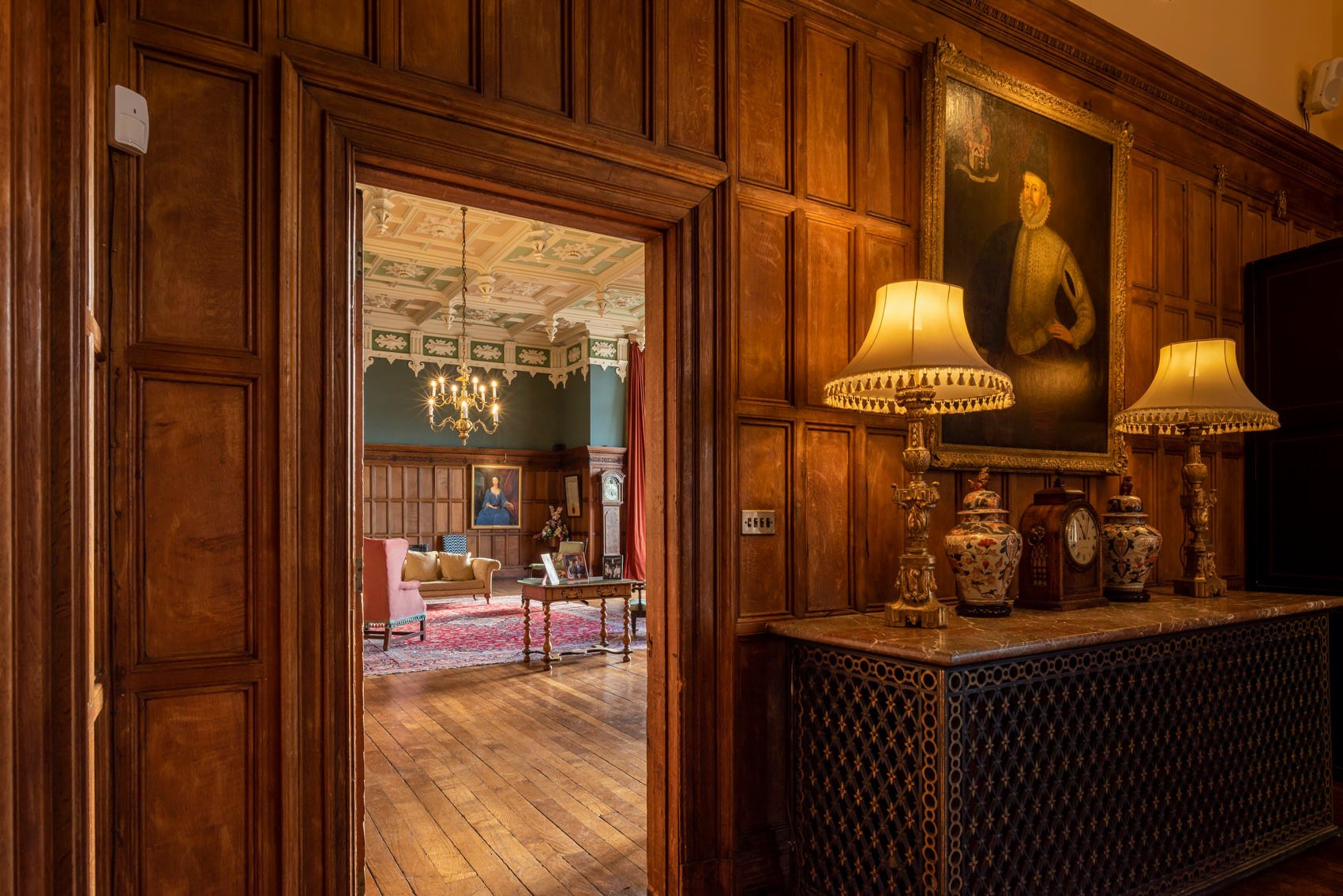 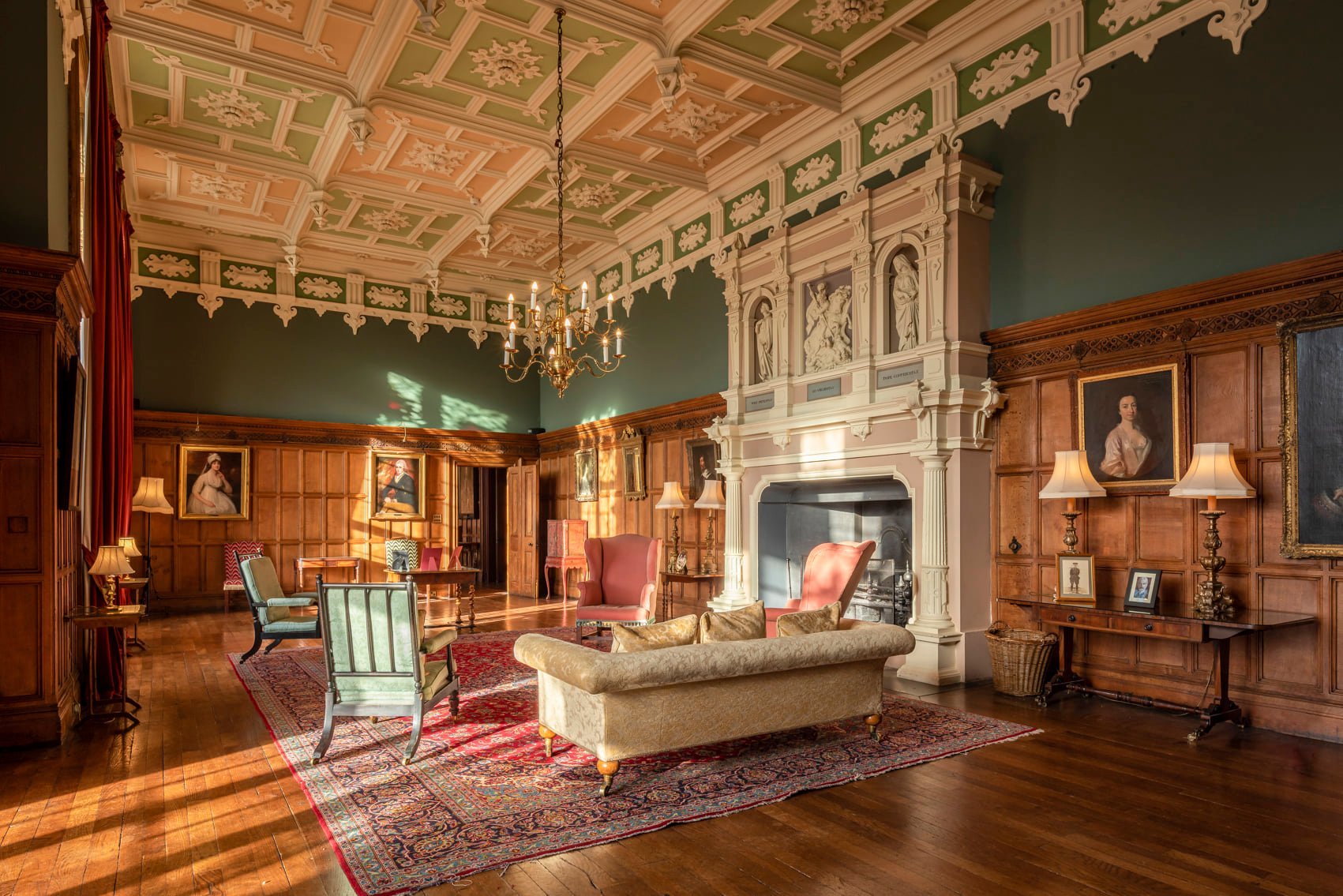 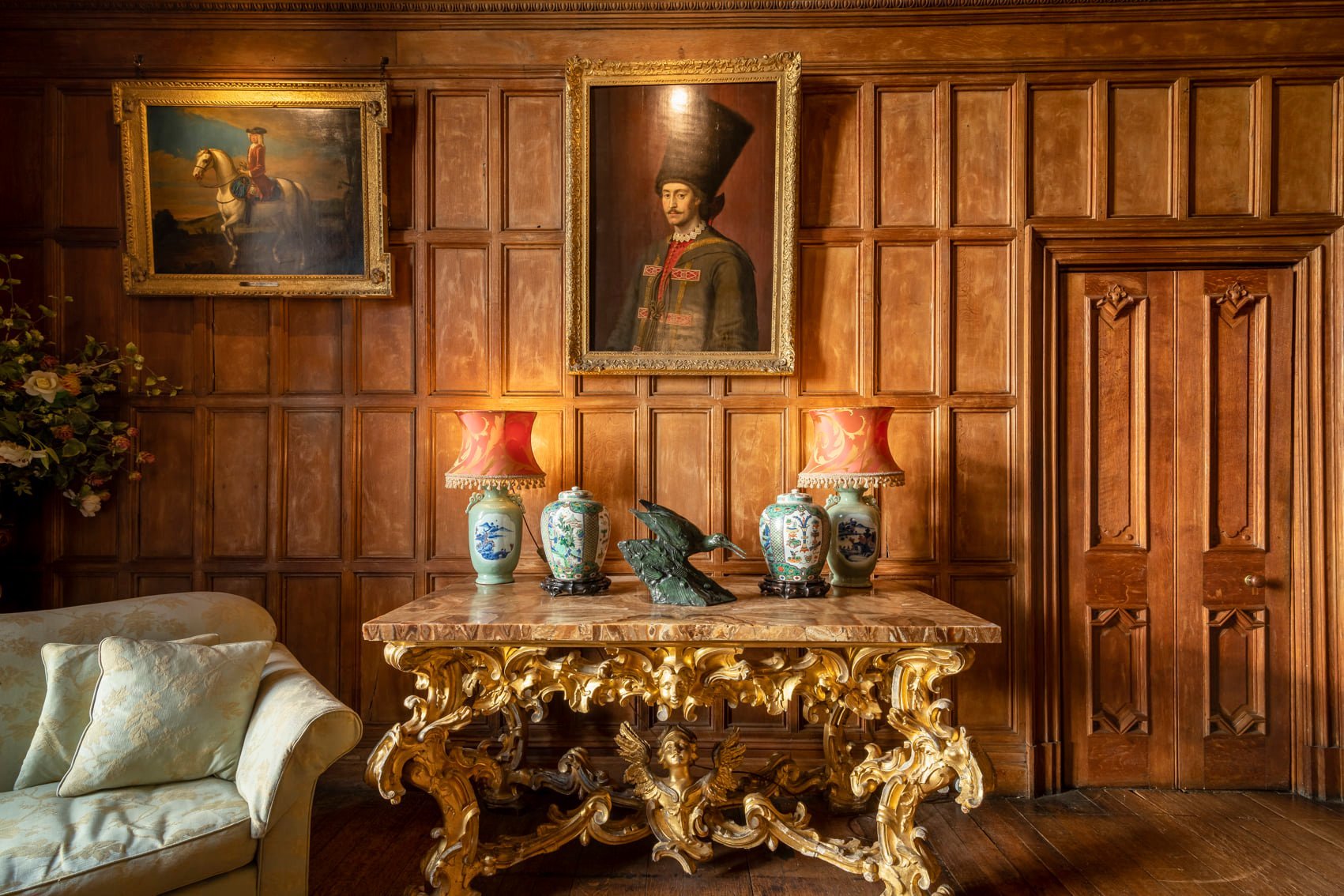 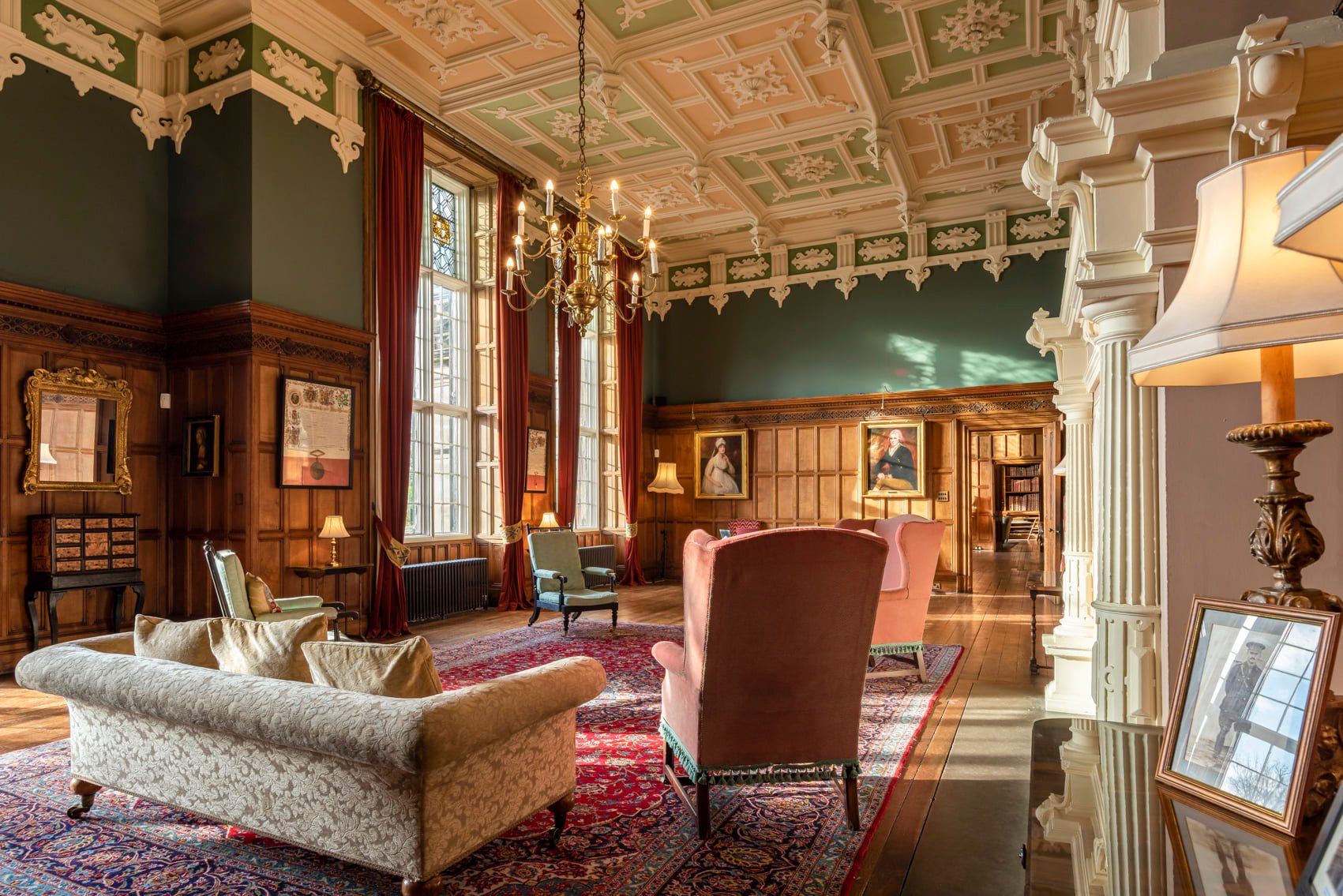 Latham designed the dining room doorways and panelling as well as the neo Elizabethan ceilings which were installed in 1842 by J Hughes of Manchester.  The dining room table (unseen) was made for the original dining hall which was demolished in 1968. It sat 24 people. 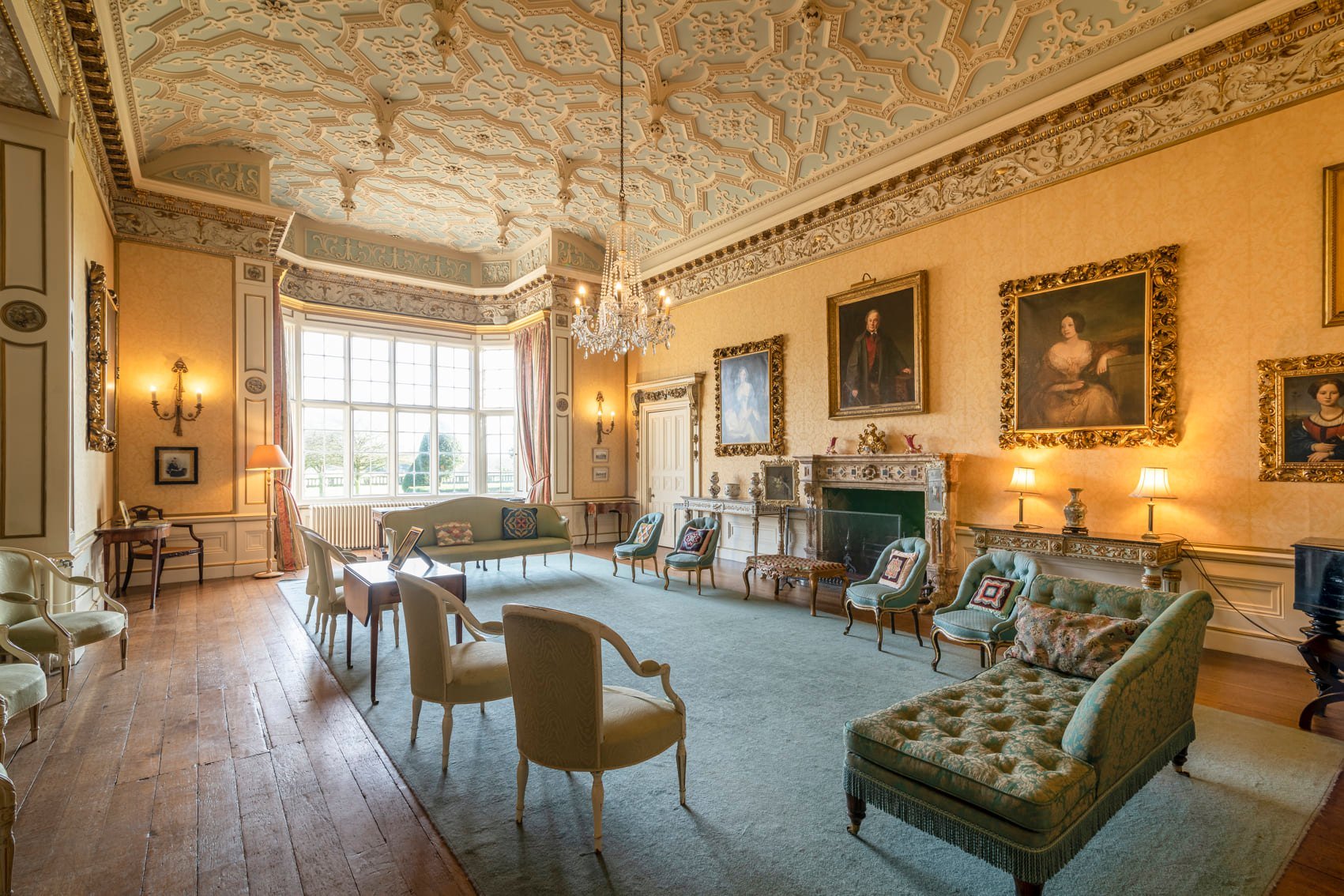 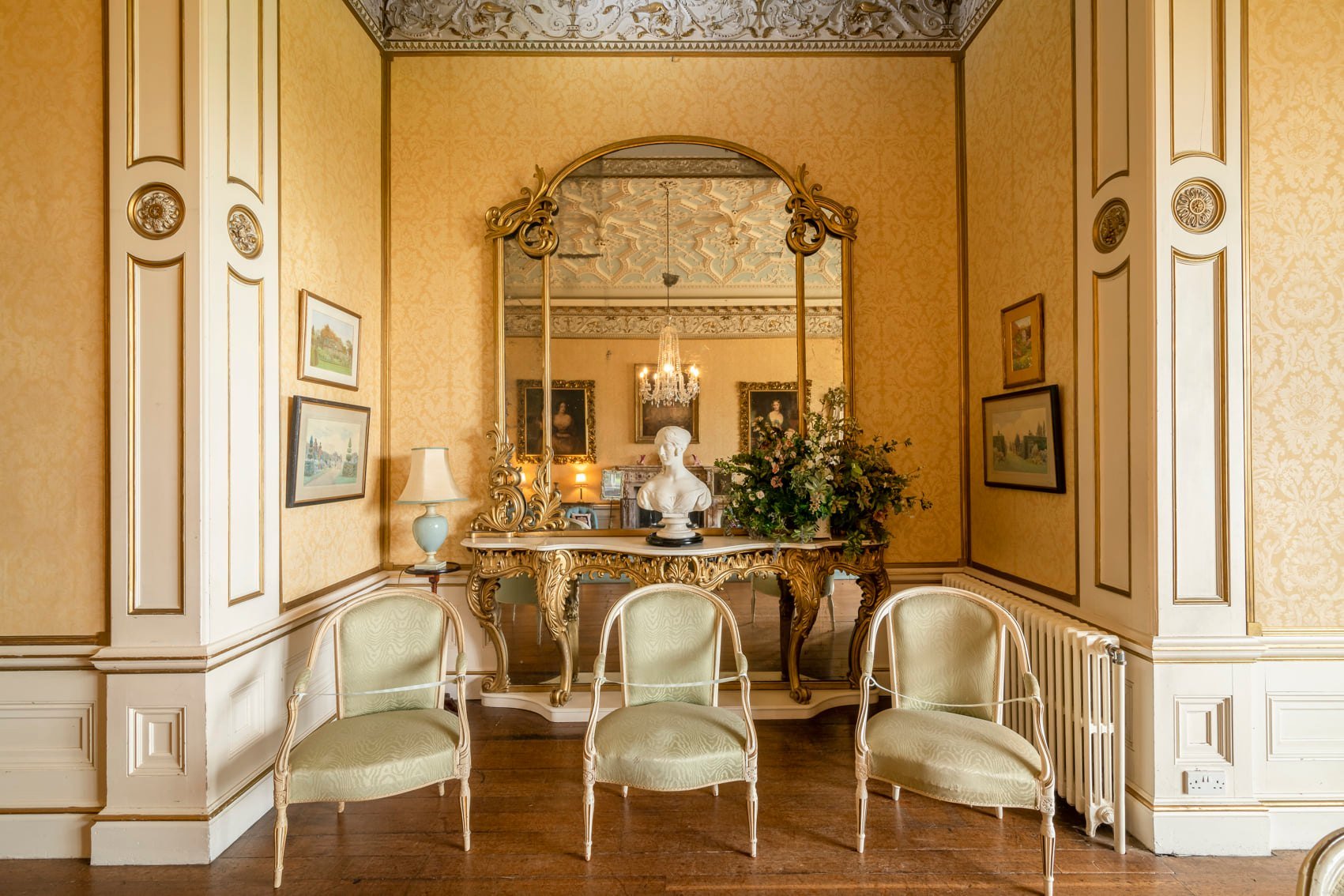 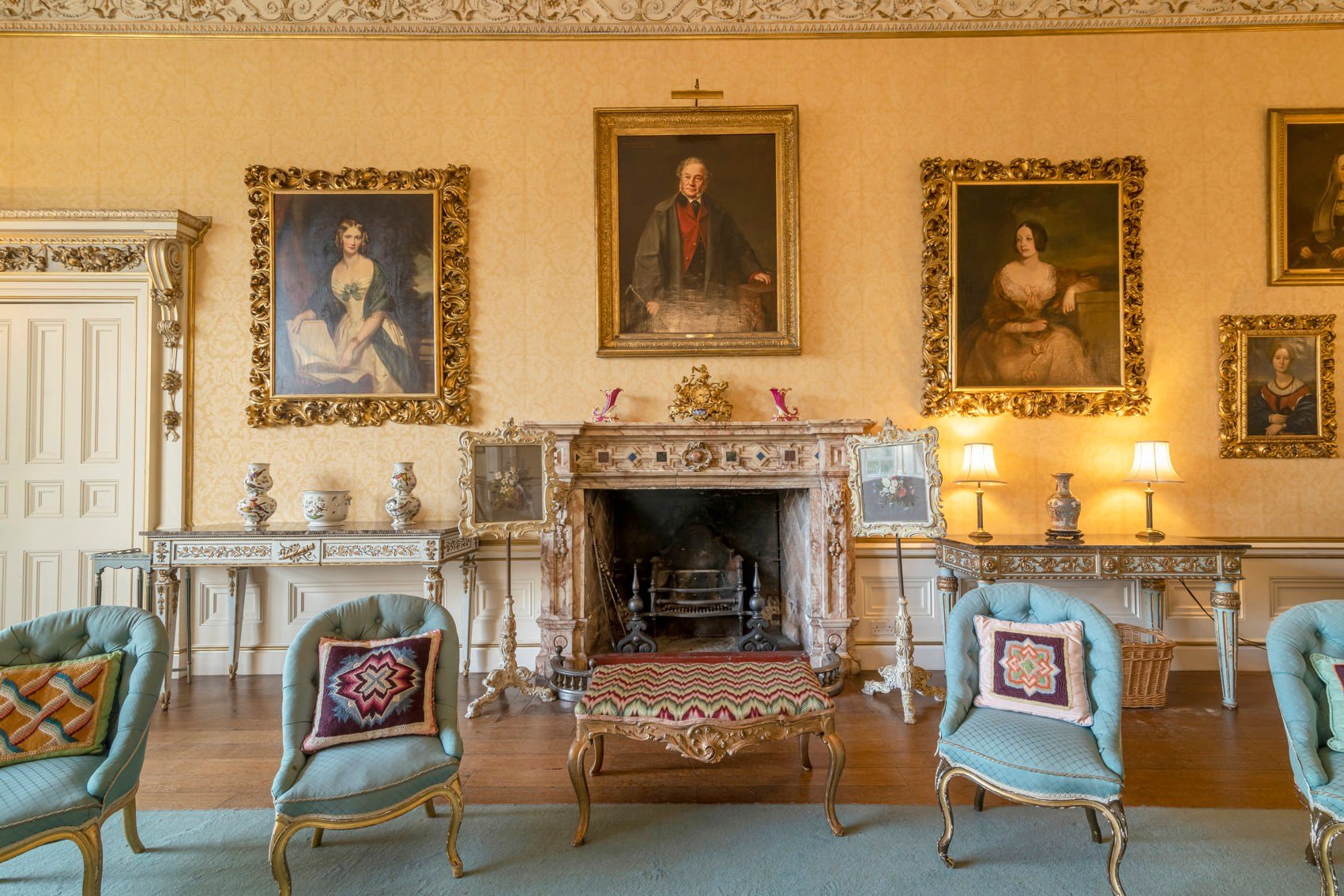 The beautiful drawing room at Arley Hall was is devoted to the memory of Rowland Egerton Warburton, whose portrait hangs over the fireplace.

As these beautiful images show, Arley Hall is a classic example of a money-no-object approach to building design and interior architecture.  Rowland Egerton-Warburton was young when he inherited the family money, and he was clearly passionate about recognising his family legacy by way of a grand architectural statement.  Of all the periods to choose to replicate, Elizabethan architecture and interior design is the most involved and consequently the most expensive to reproduce, requiring the finest plasterers, carvers, brickmakers and joiners to deliver.  It would have been a very costly undertaking but Rowland had the vision necessary for such an undertaking and he has certainly left an impressive legacy.

“Without great patrons, there would be no great architecture” said Sir Edwin Lutyens.

Arley Hall is the proof.

If you’d like to discuss our approach to design and discover first hand our passion for brilliantly designed joinery and how it can improve your experience of living in a period house and form part of your home for generations, please email newprojects@artichoke.co.uk or call +44 (0)1934 745270.