As designers of bespoke kitchens, libraries and architectural joinery for period country houses, we often need to delve into the past to gain inspiration, and often that journey leads us towards classical design.

It’s a common misunderstanding that formal architecture is rigid and inflexible. In fact we’ve found the opposite to be the case.

Granted, certain shapes and mouldings are very much guided by geometry, and certain entablatures and orders are to be used in certain specific ways, but the rest seems very much down to the architect.  In fact, it’s this geometry that’s been the reason for classical architecture’s success around the world.  Geometry gave the architecture a formula that meant it could be copied, time after time, beautifully, in the same way, without risk of changing the proportions and nature of the work.  It was, in many ways, architecture by numbers.

For designers, architects and artists – and for who or whatever was the architect of the natural world – 1.618 is a magic number. It represents the golden ratio: a figure arrived at by dividing a line into two parts so that the longer part divided by the smaller part is also equal to the whole length divided by the longer part. The Golden Ratio, or Golden Section, is an important principle in our work. Our designers work with the Golden Section and other classical principles to bring balance and harmony to our clients’ homes. 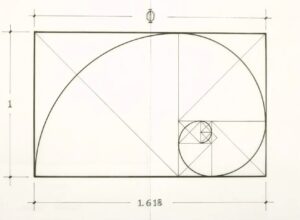 One of our favourite reference books for classical interior architecture, bespoke classical kitchens and architectural joinery projects is The City and Country Builder’s and Workman’s Treasury of Designs, written in 1750 by Batty Langley.

During the early periods of formal English Architecture it was not uncommon for architects to be from other trades, such as joiners, cabinet-makers or even, in Langley’s case, landscape gardeners. Much of London’s early architecture was in-fact “borrowed” from books such as his, and we have referred to many of them ourselves when designing bespoke kitchens or architectural joinery in classical country houses.

These are some of our favourite plates of English formal architectural publishing from this period.

What is so interesting about these plates is that they show so clearly how classical formal architecture gained such popularity around the world from its origins in Athens and Rome. The use of geometry in formal architecture provided a formula that could be copied and exported through books such as Langley’s. This allowed the proportions to be replicated over and over again in the same beautiful way.

A really good example of the exporting of formal architecture was the use of Langley’s book during the building of George Washington’s iconic home, Mount Vernon in Virginia, USA. The images below show how the builder used Plate 51 from  The City and Country Builder’s and Workman’s Treasury of Designs influenced the creation of the grand Palladian window.

To create Artichoke kitchens and interiors we blend creative, imaginative design with a deep understanding of period architecture and styles. But we are experts rather than purists. Instead of slavish reproduction, we devise interventions that weave into the fabric of a house and into its architectural story.

With each project, whether a kitchen or a whole house, we aim to create Britain’s future heritage, adding architectural value to our clients’ houses for their family and for future generations. We aren’t simply making joinery. We are making history.