Moving a kitchen in a listed building is a common requirement among many new country and listed house owners, and it’s becoming increasingly popular as family lifestyles continue to become less formal.

The first question we ask is ‘What’s wrong with the kitchen where it is?’ We can almost always predict the answer. In the larger country house it was typical for kitchens to be located as far away from the family quarters as possible, thus eliminating noise, cooking smells and reducing risk of fires, most likely to start in the kitchen, spreading to the family part of the house.

In addition to kitchens in listed buildings being located as far away as possible, they were also often placed on the north side of the house, principally to stop direct sunlight spoiling food in the pantry and also to take advantage of the prevailing southwesterly winds which would push chimney smoke caused by the kitchen fires away from the main house and gardens.

So, pre 1900, country house kitchens were sited at the extremities of a building on its north side, while today we want our kitchens at the centre of our homes, usually facing south. 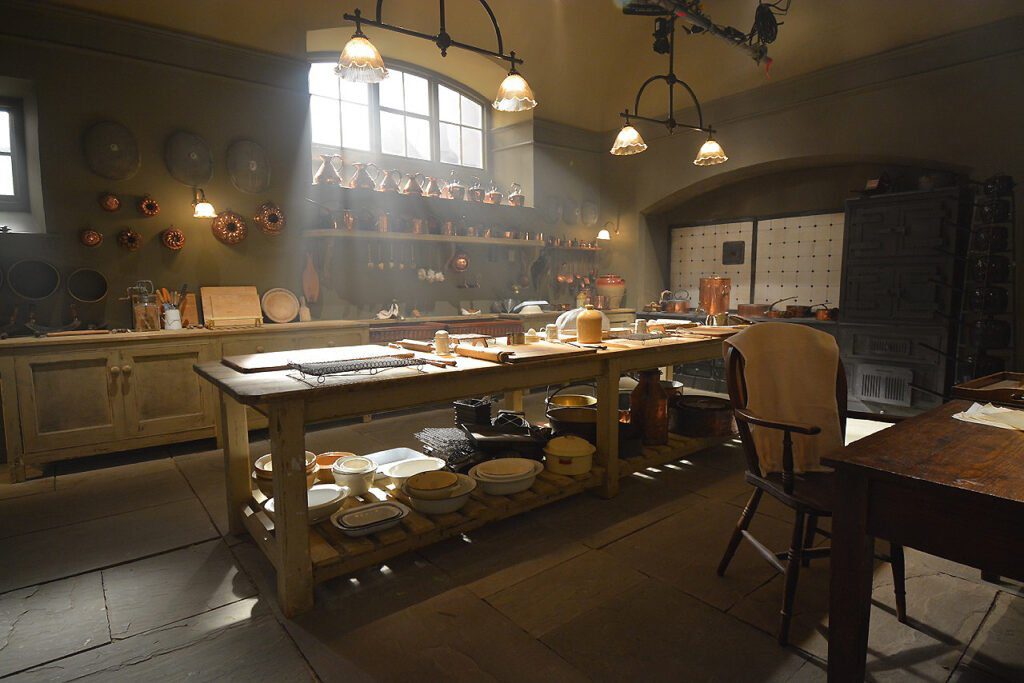 When to Seek Advice?

If you’re looking at kitchen ideas for Grade 1 and 2 listed properties and are contemplating moving a kitchen in a listed building, you’re going to have to seek Listed Building Consent from your local planners. Sometimes this will also require the involvement of Historic England (it used to be English Heritage and we explore the difference between the two organisations in this earlier article.)   This exercise will need an architect or heritage architect familiar with your local planners. However, it is worth also seeking advice from a specialist bespoke kitchen designer well-versed in moving kitchens in listed buildings to ensure the space being allocated by the architect is optimal, appropriate and will meet you and your family’s needs. Ideally this should happen well before the planning application is submitted. Not doing so could mean the proposed architecture limits how the kitchen ideas are laid out, with subsequent planning applications needed for changes to improve the space.

What are the Issues of Moving a Kitchen in a Listed Building?

There are four key issues to be aware of.

Firstly, in a big family house, the original kitchen is likely to have been supported by a series of ancillary rooms, such as a scullery, larder or butler’s pantry. The issue many clients face when moving a kitchen in a listed building from its original location, say to a living room or dining room, is there will usually need to be provision within the new location for these supporting functions. We will often achieve this by breaking the new space up using joinery or architecture, but this can be challenging in rooms such as dining rooms which may have very high ceilings, festooned with elaborate fibrous plaster mouldings.

The second issue to consider when moving a kitchen in a listed building is a lack of usable wall space. In a back of house kitchen, the original architect will have designed the windows above head height as per the image above, providing ample wall space against which to place ovens and dressers. In a dining room or living room however, there are often impressive windows, French doors or grand fireplaces, limiting the available wall space against which kitchen furniture can be placed. Bear this in mind when considering which room to move your kitchen into.

The third issue is focussed on aesthetics. When exploring Grade 2 listed kitchen ideas and inspiration you’ll quickly discover that, kitchen furniture moved into a dining room or living room without a sensitive design approach can often look incongruous. To overcome this conundrum when moving a kitchen in a listed building we will often develop a fictitious story which explains how the space might have evolved. This will help tie a design brief together. For example, we were recently asked to design a kitchen into one of the principle living spaces in a Chateau in Burgundy, France. Rather than just take the room we were given to design a kitchen into it, we developed the following narrative with the client.

Before being a kitchen, the room was used by the previous owner as a collector’s library in which she stored curiosities from her travels around the world. These display cupboards were to be repurposed for use as kitchen storage.

Creating such a narrative will provide a focus for Artichoke’s creative team. Instead of designing a kitchen plonked into what was an old Salon, the room becomes a grand albeit slightly eccentric library modified for its new use as a kitchen. This is a much more exciting and beguiling option!

Finally it is worth considering your access into the kitchen from your daily entry point into the house (usually nearest the car) and whether moving the kitchen to the new space will make this access more cumbersome. Dragging the family shopping through the centre of the house is as fun as it sounds!

Each house is different, so there are many other factors that can sometimes raise their heads. If you are considering moving a kitchen in a listed building we’d be happy to talk through the options with you.