Fota House is a magnificent Regency mansion with over 70 rooms (including a stunning cooks kitchen).  It is sited on Fota Island near Cork, Eire and was owned by the Smith Barry family. Following some years of neglect it has been lovingly restored by its current guardians, Irish Heritage Trust.   A direct family connection with its last private owners, Dorothy Bell of the Smith Barry family, recently drew me back, partly out of curiosity, and partly because I had possession of numerous items which were more useful to Fota than us.

As with many grand houses of the period, Fota was designed specifically to support the most important element of Regency life; entertaining.  The interior architecture was configured to allow an army to work discreetly in order to support the flambouyant lifestyle of the then owner, John “The Magnificent” Smith Barry.  The architects, William and Richard Morrison designed the house so cleverly that there was little evidence of the dozens of domestic staff employed.

One of the busiest zones on the house was the kitchen; it would have been an animated hub of activity and filled with noise, clattering, calling and would have been filled with steam and heat. In a well planned house such as Fota, the kitchen was placed as far away as possible from the main house to minimise the risk of accidental fire spreading through the grand rooms.  Extra turns were added to the corridors to reduce the spread of cooking smells, often at the expense of the John “The Magnificent’s” hot food which had to travel a fair distance to the dining room.

This large table was at the heart of Fota’s kitchen and was used solely for food preparation rather than dining.  The crucial ingredient for many of the soups and stews was stock, which were kept in stock pots and kept on the stove in the corner of the room to keep warm. 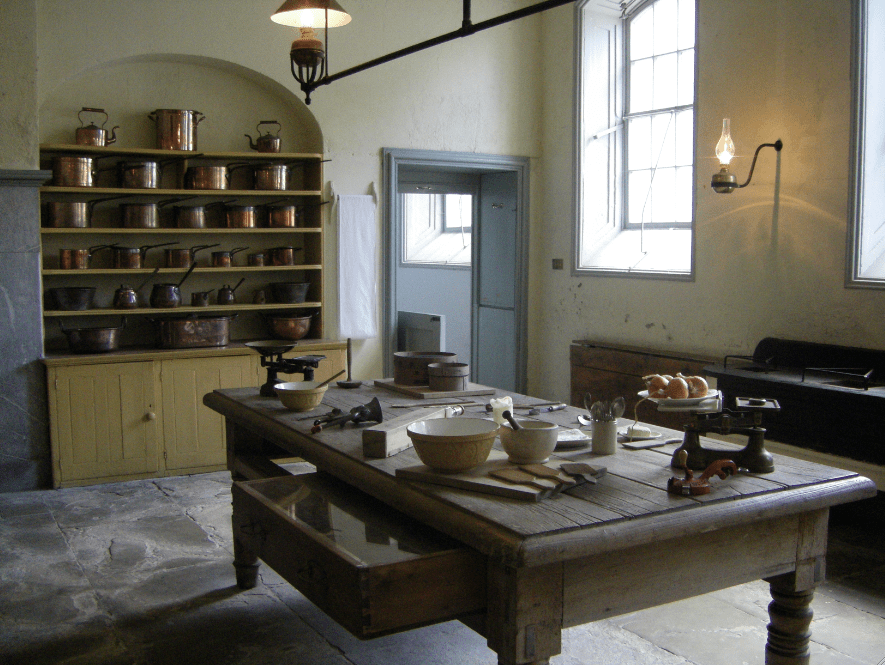 Fota’s cook had the option of numerous methods of cooking.  At the main fire there is a turnspit for roasting (the preferred method of cooking in 19th century). Meat was secured on the skewers that roasted slowly in front of the fire.  The juices were kept in a tray below in which Yorkshire puddings were made.  The size of the fire could be adjusted to suite the size of the meat, and a spit boy was employed to turn the spit evenly.  Later the spit was rigged up to a system that used the rising hot air in the chimney to turn the wheel that rotated the spit. 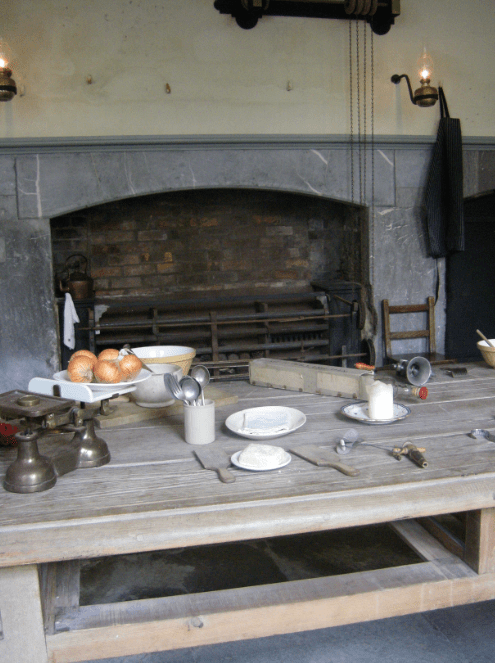 Copper pots and pans were cleaned every evening by the scullery maids before being replaced ready for another day’s use.  The units under the windows acted as a type of indoor barbeque and used for frying, making sauces and cooking vegetables

In the same way a head Chef runs a restaurant kitchen, the Regency cook would have ruled the roost and would have been considered one of the upper servants.  She had similar powers as the housekeeper and would have been called “Mrs”, regardless of whether she was married or not.  Similar to modern day chefs, Regency cooks would have been considered pretty temperamental and secretive with their recipes; as a consequence, finding a good cook was hard.  The last cook at Fota, Mrs Jones, was one such a lady.  She was vivacious with dark curly hair and very assertive; servants would not dare enter the kitchen unless they’d been told to; she had complete control over who went into the kitchen.  Indeed, it was extremely rare for members of the Smith Barry family to go there either.

The Regency cook was responsible for feeding the family and servants every day and also when they entertained guests during house parties, shoots and dinner parties.  John The Magnificent’s favourite party trick was to ask the servants to bring as much wine to the dining room as possible, after which he would lock himself and his guests in and throw the keys out of the window.  Lunch sometimes went on for days!.

Hospitality was an important part of life at Fota, as well as at any Regency house of this type, and the reputation of the family was on show. The entertaining started when the raw materials were left at the scullery door.  In a Regency kitchen, each servant had their job and each room had its own purpose.  Produce was sorted, cleaned, prepared and stored in large quantities, and consequently the cook worked closely with the head gardener so she could understand what fruits and vegetables were in season.

Many of the tasks carried out in kitchens today are the same, although carried out in a different way.  In the Fota kitchen, everything was prepared using manual labour – much of the work of grinding, chopping, mixing, beating and mincing was carried out with the help of kitchen maids.  The cook and her assistants used the large table at the centre of the room for preparation, with implements stored in drawers.  Kitchen maids were also in charge of keeping the kitchen clean and a major every day task was to scour the tables, shelves, dressers and ovens with soap and hot water.

The Regency Cook’s kitchen was, in many ways, the precursor to the modern domestic kitchen and it’s certainly been the inspiration for a number of Artichoke design commissions, including the kitchen shown below.

If you find yourself in Cork, I would thoroughly recommend a visit to Fota House, not just for the house itself, but for the stunning arboretum and gardens.

With thanks to Eileen Cronin, the niece of Patty Butler who is the last surviving servant from Fota House and whose kind permission we have for re-producing these memoirs. Thanks also to Niall Foley and our friends at Irish Heritage Trust, Jennifer McCrea and Laura Murtagh, authors of Aspects of Fota, Stories from the Back Stairs.