As a craft based design business focussed on creating bespoke kitchens and furniture to integrate successfully into the fabric of buildings, we need a thorough understanding of them, their histories and English architecture in general. We spend a great deal of time in buildings of all types, surveying them, designing their interiors and fixing into their structures.

We mainly work in period properties, so a firm grasp of their architecture, why they are shaped the way they are, and what materials have been chosen in their construction is very important to us. In a geeky sort of way we also find it fun.

During the early 1700s and before, the building trade was actually run primarily by craftsmen; mainly by joiners and carpenters. This makes a great deal of sense; most English architecture of the time was timber framed. These craftsmen all had at least seven years of apprenticeships under their belts and were people of considerable skill.

During this period, the term ‘architect’ was used by anyone who could get away with it. Prior to the introduction of formal Italian inspired classical architecture by Inigo Jones in the mid 1600s, English architecture was essentially medieval in form, with most houses being built organically and of timber frames with no formal design organisation, proportion or layout to them. There was no real need for architects. Most new buildings were designed by builders. There was no such thing as English Architecture in a formal sense.

The introduction of formality in building design came through classical architecture. Classical English architecture’s more rigid design requirements meant the need for someone to plan and design buildings more carefully. It also required new materials to achieve the various shapes, mouldings, carvings etc and this meant a greater understanding of the materials capabilities, stresses and loads.

To begin with, this new role of architectural designer was taken on by the joiner or craftsmen (occasionally it was also taken on by members of the landed gentry, plump with inspiration from their grand tours of Europe).

As you can see from the architecture of Banqueting House, Classical and Georgian architecture is complex; its shapes, mouldings, facades, hierarchies, planes and orders require the use of knowledge, academic formulas and new geometry that wasn’t necessary in the construction of timber framed houses. Its introduction to English architecture presented an opportunity for craftsmen to better themselves, and many stepped up to the plate.

Two things typically happen when a new and game-changing approach is introduced to any society. Firstly, an influx of quasi-specialists on the new subject appear, and in this case these were the people closest to the coal face; craftsmen and builders. Secondly, a publishing boom supports the resulting thirst for knowledge (the same thing happened during the introduction of the internet in the mid 1990’s).

Both these things happened during the introduction of classical English architecture, particularly in the publishing of building pattern books to help educate the uninitiated about classical architecture’s forms and functions. Initially, these books were written by craftsmen for fellow craftsmen, and later they were written by new architects for potential clients. These books were used by builders to copy from, and they formed the pattern around which London’s early classical architectural structure and then Georgian architecture was born. Such books also started formalising the way in which new building designs were actually erected. The most famous reference book at the time, The Art of Drawing and Working the Ornamental Parts of Architecture, was written by Batty Langley.  Click this link to see some of our favourite plates from the book.

A formality of design also led to formality in the choice of materials.

Brick – The primary building material for Georgian buildings in London was brick made from the clay beds of London. The exterior bricks were the best quality, with garden walls, party walls etc often being constructed from ‘place’ bricks which were as much ash as they were clay and often prone to defects. Knowing the quality of what we’re fixing into is important for Artichoke; we often design quite technically complex architectural pieces such as minstrel’s galleries or large bespoke kitchens with heavy materials, and we need to know well in advance how robust the structure we’re fixing into actually is. There are a number of times I can think of when one of our installation team has attempted to drill into bricks that have simply disintegrated.

‘Place’ bricks were the cheapest, with the most expensive being ‘Cutting’ bricks, a brick made from fine clay and capable of being very accurately cut. These bricks were usually reserved for exterior decorative architectural detail such as door or window arches.

Timber – The main timber types used by builders of the time were English oak and Baltic fir (Russian Deal is another name for it). English oak was considered a premium timber, as it still is today, and Baltic fir was used for most structural things. It was also used for interior architecture and was regularly painted and gilded. Before Georgian times, Baltic fir was scraped and left unfinished, only being painted once this became popular and Georgian tastes started to influence the English architectural scene. Finishers at Artichoke need to be able to match 300 year old Baltic fir; we have had to do exactly this for a recent project in Upper Brook Street in London.

Oak was reserved for the best and most visible structural work such as window frames and some interior architectural detailing. Mahogany brought back from the West Indies was often used for panelling, hand-rails, panelled doors and so on in high-end residences.

Stone – Stone was used less in Georgian buildings than one may think, certainly for many of the more domestic London townhouses. Portland stone was used decoratively in London homes for items such as window dressings, exterior cornices and porches.

For Artichoke, an extensive knowledge of these materials, and the scale and proportions required to be true to classical English architecture is vital, not just because it helps us understand the context we’re fitting our work into, but also because it informs our design decisions. In this way our work becomes part of the evolution of the house continuing the legacy of classical English architecture. 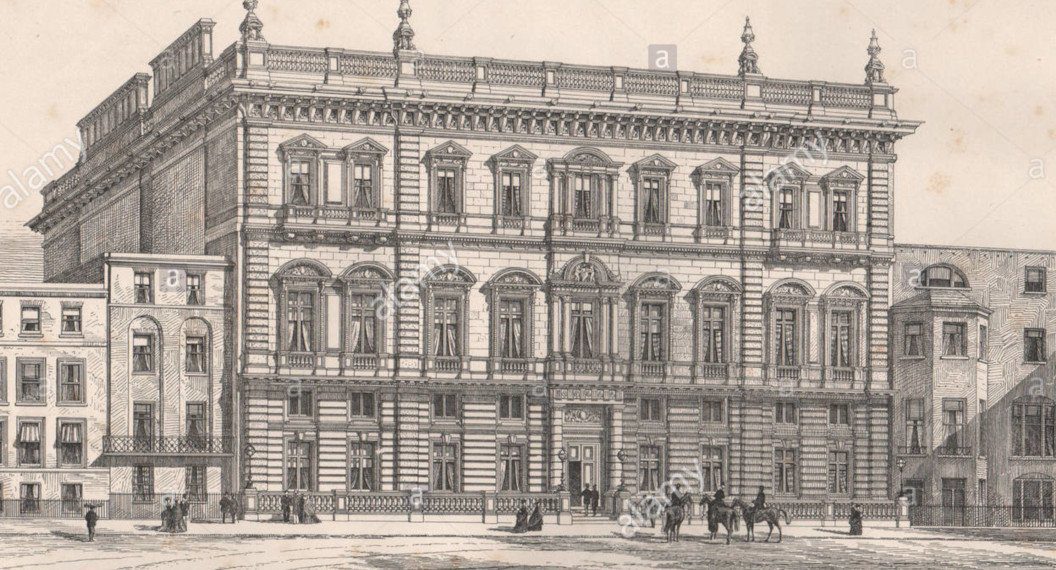 As designers of bespoke kitchens, libraries and architectural joinery for period country houses, we often need to delve into the past to gain inspiration, and often that journey heads towards classical design.

It’s a common misunderstanding that formal architecture is rigid and inflexible.  In fact we’ve found the opposite to be the case.

Granted, certain shapes and mouldings are very much guided by geometry, and certain entablatures and orders are to be used in certain specific ways, but the rest seems very much down to the architect.  In fact, it’s this geometry that’s been the reason for classical architecture’s success around the world.  Geometry gave the architecture a formula that meant it could be copied, time after time, beautifully, in the same way, without risk of changing the proportions and nature of the work.  It was, in many ways, architecture by numbers.

One of our favourite reference books for classical interior architecture, bespoke classical kitchens and architectural joinery projects is The city and country builder’s and workman’s treasury of designs, written in 1750 by Batty Langley.

During the early periods of English Architecture it was not uncommon for architects to be from other trades, such as joiners, cabinet-makers or even, in Langley’s case, landscape gardeners.  Much of London’s early architecture was in-fact “borrowed” from books such as his, and we have referred to many of them ourselves when designing bespoke kitchens or architectural joinery in classical country houses.

These are some of our favourite plates from this period of English architectural publishing.

What is so interesting about these plates are that they show so clearly the reason that classical architecture gained such popularity around the World from its origins in Athens and Rome.   The use of geometry provided a known formula that could be copied and exported through books such as Langley’s.  This allowed the proportions to be kept and thus copied repeatedly in the same beautiful way, time after time.

The best example of the exporting of architecture was the use of Langley’s book during the building of George Washington’s home Mount Vernon.  The builder used Plate 51 from The city and country builder’s and workman’s treasury of designs when building the Palladian window below.