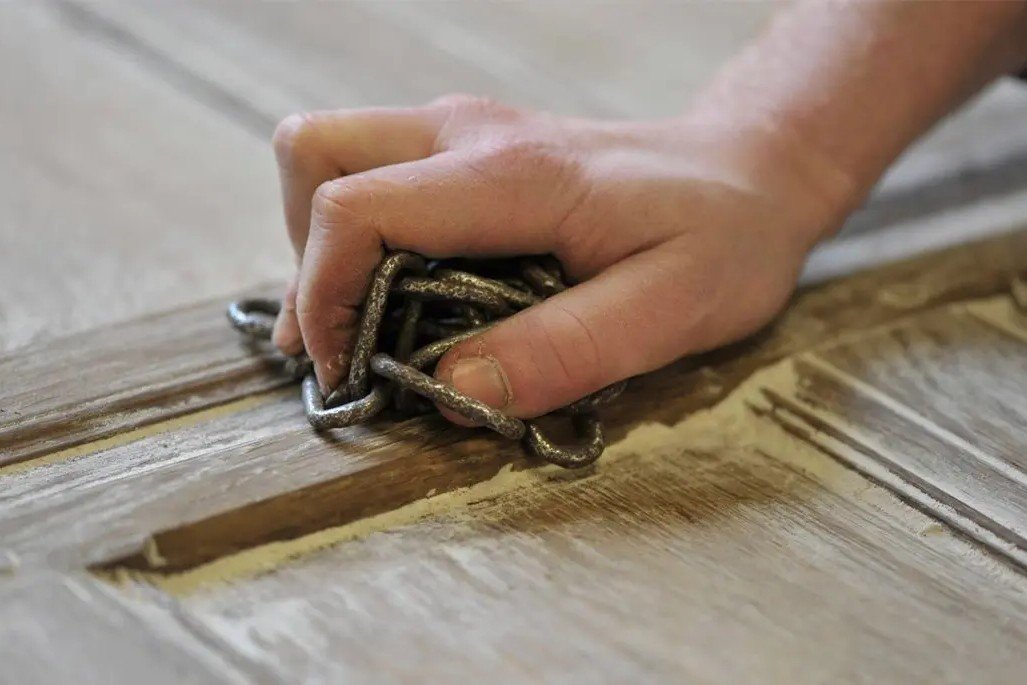 Artichoke are experts in joinery led interiors.  Our team of period wood finishers have the skill to apply texture and patina to wooden detail allowing it to seamlessly blend into a period setting.  Similarly, in newly built houses our joinery has a transformative effect – wooden elements, artfully finished, settle a new house and provide instant depth and character.  Take a glimpse of a recent new build project that demonstrates our skill at period wood finishes here. This is the alchemy of Artichoke. 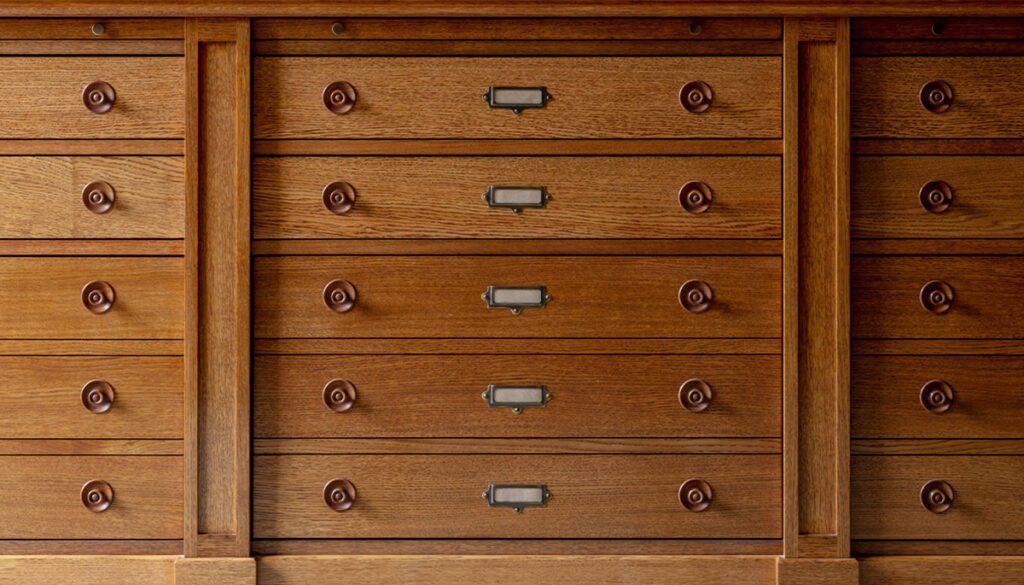 So, how do we achieve our period wood finishes?

Over decades of experience, we have built up finishing techniques that are second to none. Authentic finishes do not come out of a bottle.  To recreate the feel of antique wood requires a certain alchemy.  Staining wood is like creating a painting. It has taken Artichoke many years of trial and error to formulate authentic period finishing techniques.  This is how we make furniture look 300 years old but which is hardy enough for life in a modern day setting. 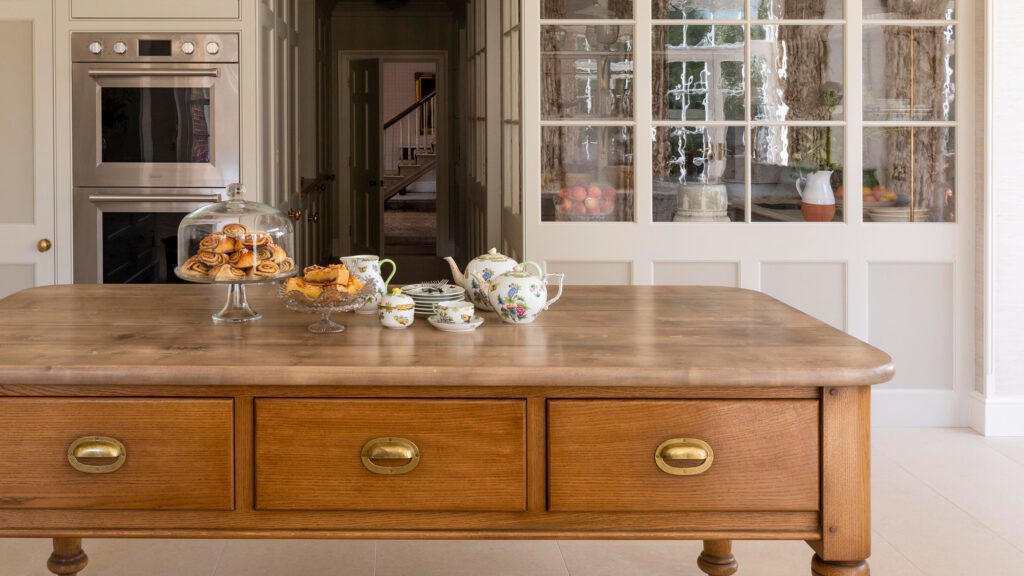 What is the point of a wood finish?

The purpose of a finish is to seal the timber to give it luster, depth and warmth.  It is driven by practical needs – unfinished wood is porous to the touch so stains and marks easily.  The application of a finish makes it resilient, the appropriate finish determined by how the joinery will be used and its context.

Nowadays, mass market production involves automated spray machines with nozzles that apply a bland and even coat around wood.  Spray painting wood in this way creates a nasty thin layer  more like a wrap than a finish, with no character or depth. It is quick and cheap but there is no sensitivity or artistry – it’s like a white wash.  At Artichoke, our finishes are entirely different. We impregnate wood rather than lay the finish on top. It seeps into the wood, nourishing it, keeping it supple and giving it colour, luster and character.

Antique furniture ages over time.  Its patina evolves through the years with human touch, exposure to sunlight and different temperatures and conditions.  To replicate the effect this passage of time has on wood, we have to accelerate the aging process.  How?  We imagine what might have happened to the furniture if it really had been in situ for decades – in terms of its colour, texture, dirt and exposure to light. 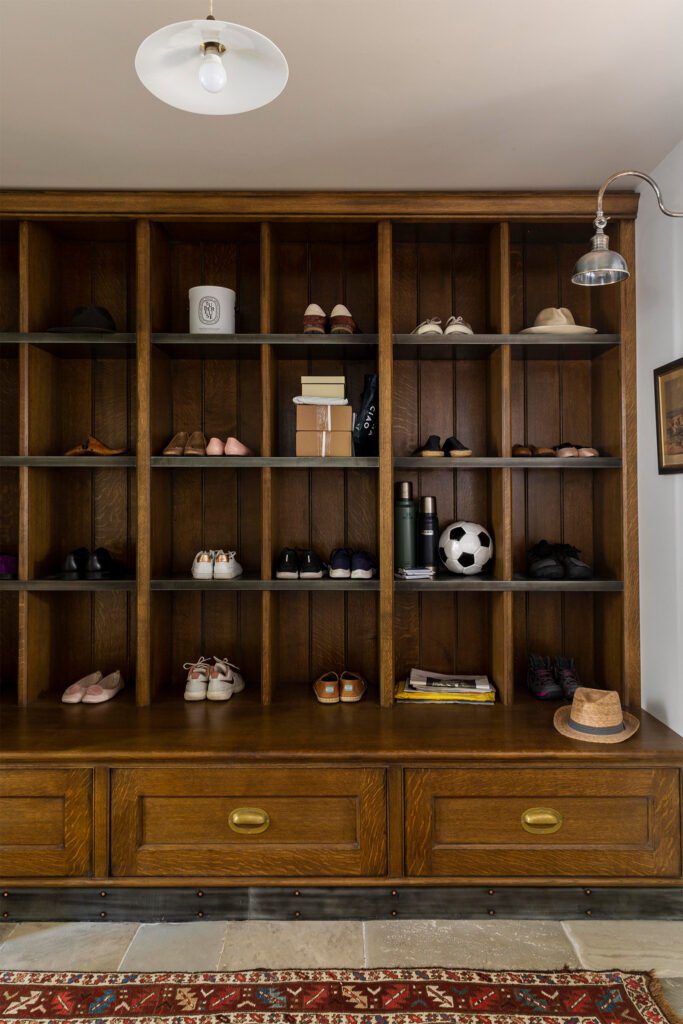 The older the piece of furniture, the greater the impact the environment has had on it.  This adds to its unique charm.  New cabinetry can feel out of place in a period building. New cabinetry in a recently built house can lack atmosphere and a sense of belonging.  So the real trick is to create an antique feel without it looking  pastiche.   Our expert finishers know how wood changes over time.  Our master finisher has a background in furniture restoration – developing expert skills in repairing old pieces using newer pieces of wood and making them match and look good. This appreciation of how a piece of furniture ages only comes through many years of handling.  It is an art requiring hours of work and many years of collective skill and experience.

The appearance of wood is effected by it’s exposure to light and temperature and how it’s been handled and cared for.  Different timbers react differently over time – for example when darker timber is exposed to natural light it lightens, while when lighter timber is exposed, it becomes darker. You can’t simply colour wood to replicate the effects of  sun bleach.  You can’t do it by applying lighter stains.  Instead, for an authentic finish, we use a variety of chemicals to wash out natural colours in the timbers and to add colour back in. We then layer finishes over the top – adding polish to replicate what happens over time.

Where furniture gets handled, oil and skin have an impact on the wood’s appearance.  We replicate the aging process by wiping on and wiping off layers of polish and rottenstone pigment mixed in with chalk dust. This requires time and skill and an acute sense of colour – an understanding of how natural materials behave over time and being sensitive to the character of the materials. This is where the artistry comes in – being able to add back decades of fine layers of dust and dirt accumulated in mouldings. 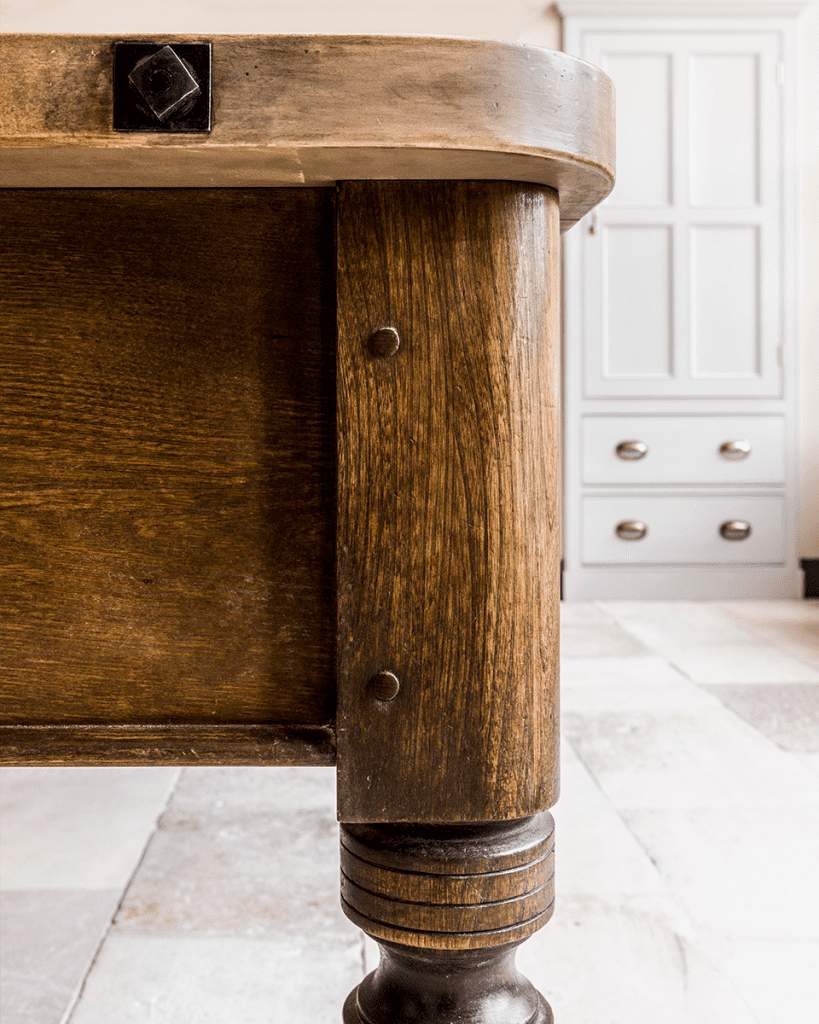 Selecting figure in timber and its stability in relation to its eventual use is vital.  Furniture gets knocks and bangs – we recreate this by various means including bashing the furniture with cotton bags full of nuts and bolts, or using a steel bar to roll down the corner of the furniture.  This emulates the wear and tear a piece of furniture will get in its lifetime. 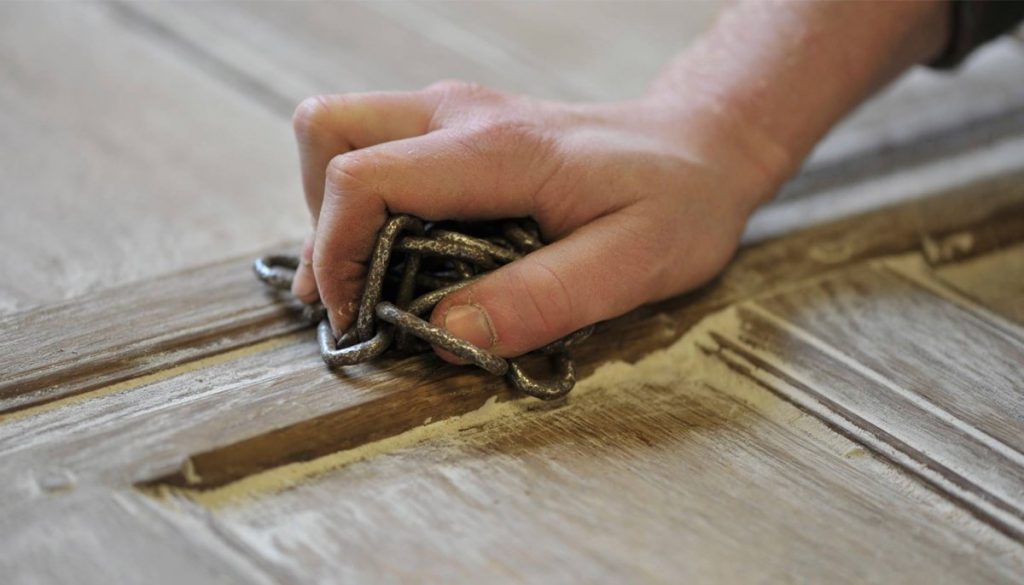 A time and place for spray finishes.

There are situations that benefit from a modern approach.  For example, unless specified otherwise by our client, we spray paint the interior carcasses of kitchen cupboards and cabinets. We finish these interiors  in a more contemporary way to give durability.  The finish will be harder wearing, better suited to the wear and tear typical in kitchens or back of house.

Time is our favourite tool.

To make furniture that feels settled in its environment requires a building of layers which takes many hours to build up.  We’ve outlined how these processes can’t be replicated by machines.  Rather, a huge input of labour is required.  Hand finishing is therefore an expensive luxury and plays a key part in the creation of our furniture.

As ever, do call us if you’d like to discuss a joinery design project further on +44 (0)1934 745270.  For more information on the range of project management services we offer, from design, installation, and finish, please click here. 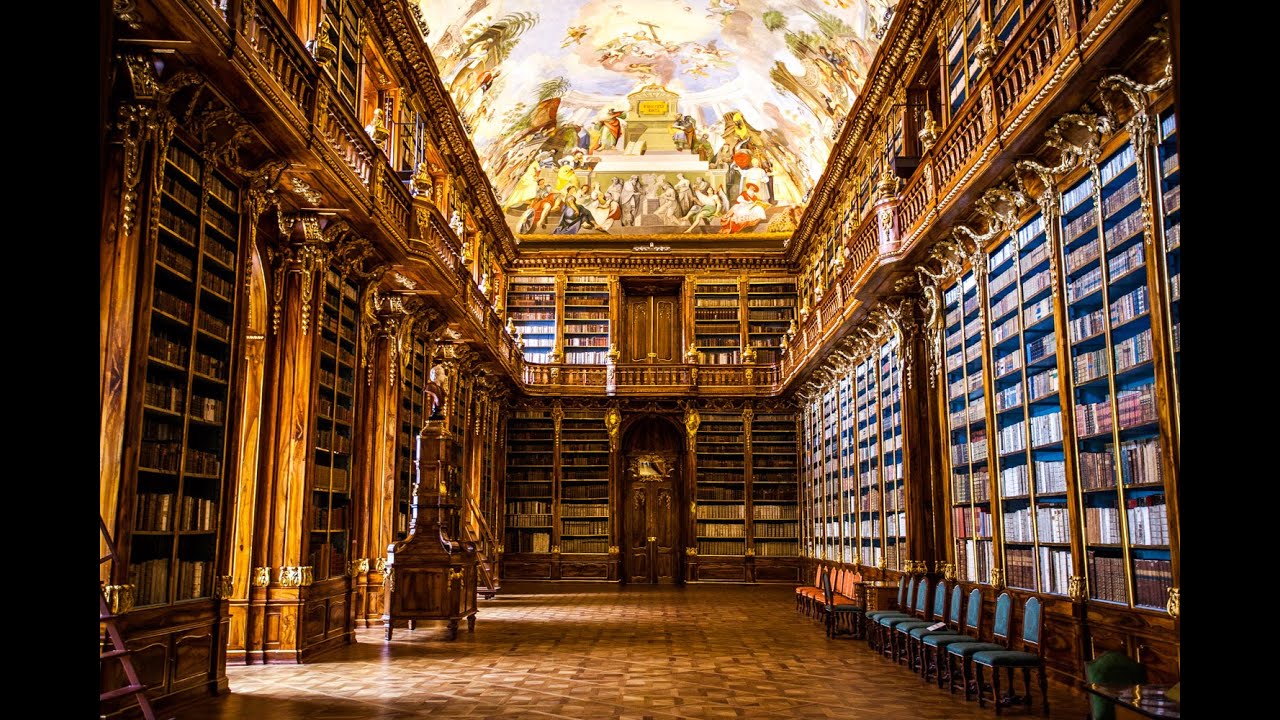 The Hall sits in gently undulating parkland with some quite magnificent architectural design features which include a listed fishing temple with a pedimented Roman Doric portico, and listed Palladian stables.

Among the requirements for the Hall was a grand library. For those unfamiliar with Baroque interior design, it can best be described as a dramatic and theatrical take on Renaissance architecture, often including bold features such as opulent use of ornaments and colour, gilding and carving. For interior architectural designers and cabinet makers, this was a deeply interesting and challenging project.

There are many baroque rooms to take inspiration from when preparing an interior design of this nature. During design meetings with the Hall’s owner, one particular room caught our eye. Built in 1779, the breathtaking Philosophical Hall in the Strahov Monastery in Prague is arguably one of the most beautiful baroque libraries and interiors in the world. With the kind permission of the monastery, we flew over to Prague to survey the detail of this inspirational interior.

The stunning wild grain walnut used throughout the library adds beauty and works well in a room of this size.

Close up of the entablatures below show the gilded swags and tails, egg and dart, dental mold and gilded acanthus leaves. 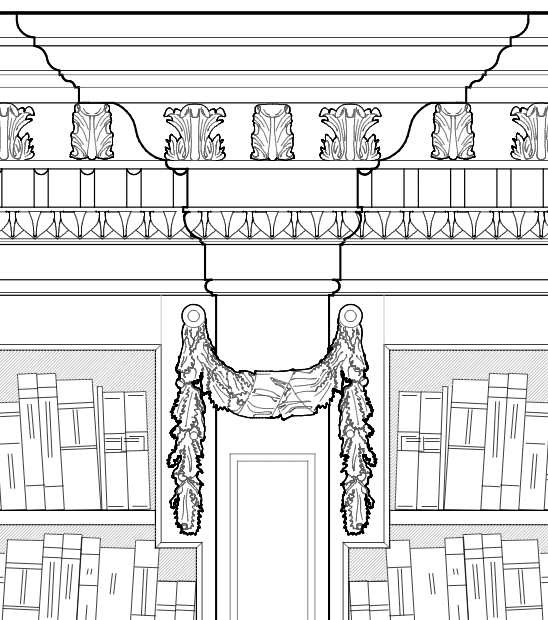 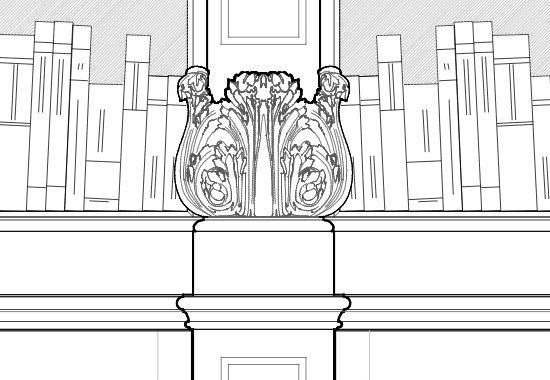 This image shows work in progress of the carved gilding work in the baroque library. Under Artichoke’s direction, all the carving in the library was undertaken by Ian Agrell Carving, an English company with offices in London, San Rafael and Calcutta. The company is one of the few carving companies who never carve by machine and their work is of the highest possible quality. All of this work is undertaken by eye using the sharpest chisels. Ian’s video is below. 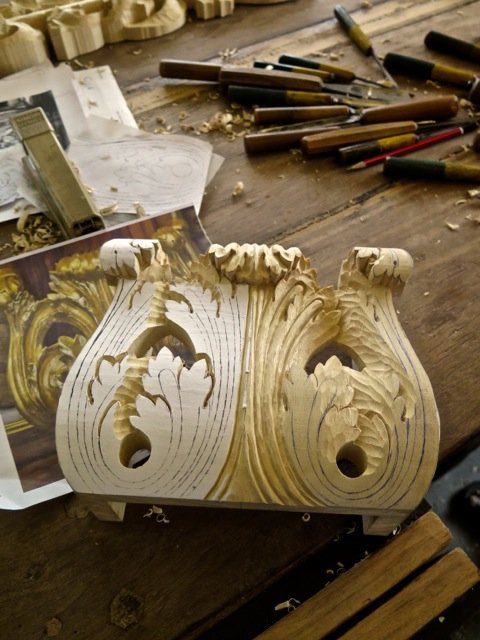 An acanthus leaf being worked on by hand. The carving is undertaken in Calcutta by carvers specially trained in classical detailing. Their work is crisp, accurate and leaves an excellent surface upon which the gilding teams can then layer their gesso and gild work. Note how the hand-drawn paper template guides the carver through the shapes and layers of the detail. 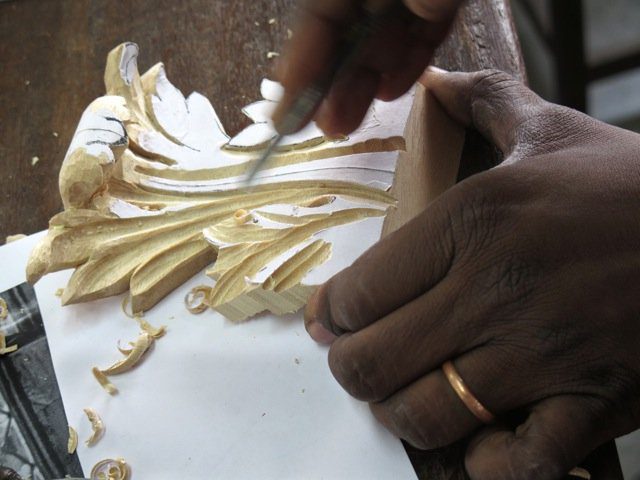 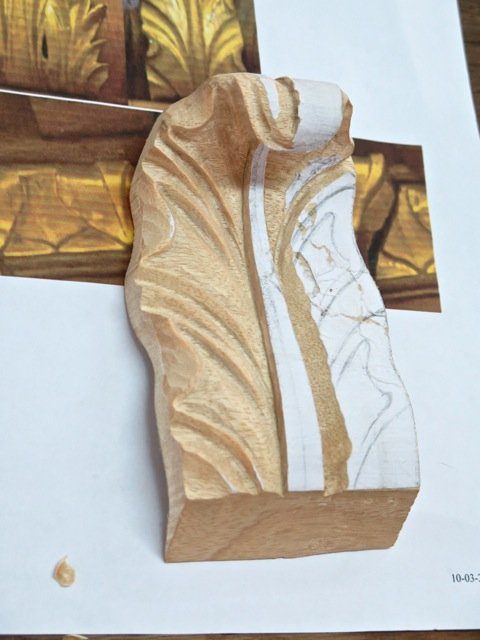 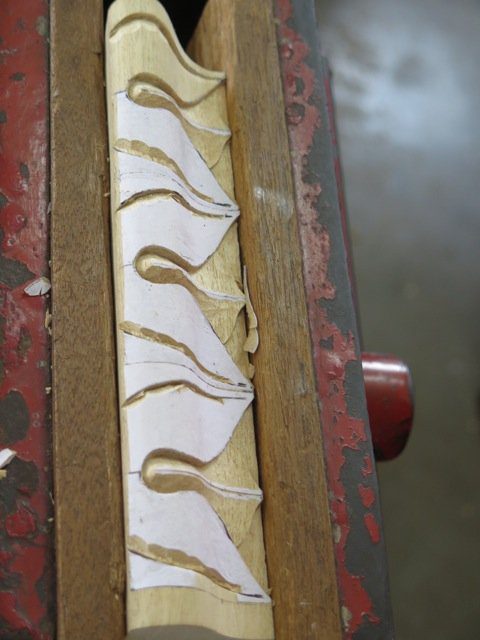 Below are some examples of the carved swags 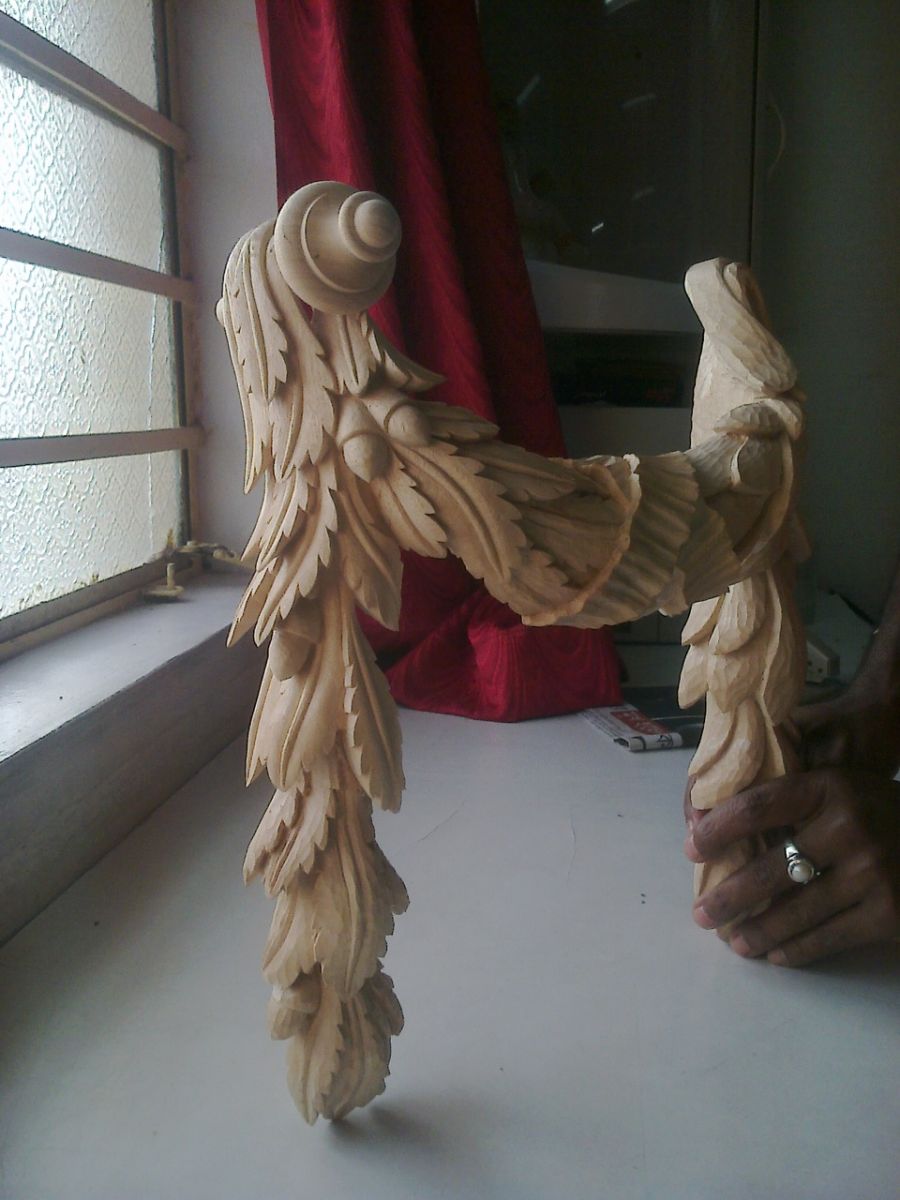 Samples of gild-work were produced concurrently to help gauge the correct level of brightness for the final gild work. The above image shows how different types of gilding can alter the final look of carved work. We specified water gilding for the baroque library which is a traditional method of applying gold leaf to a surface. It is the highest quality of all gilding methods.

The larger piece on the left has been lightly antiqued to look in period, while the other items have a much brighter and fresher tone. We partnered with Gareth from Water gilders for the water gilding of these items. 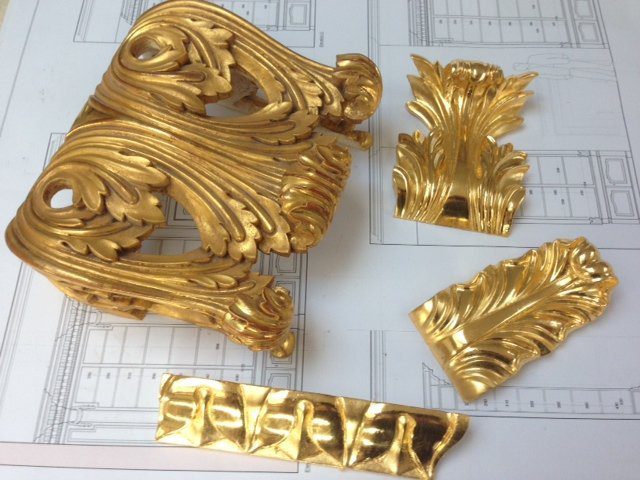 Once the final creative design is signed off, we moved on to the Production Engineering phase where Artichoke’s technical designers model the baroque library in 3D to work out the most efficient and best methods of constructing the room. We are, in effect, digital cabinet making at this stage. Each component is constructed in digital form so we know how it interacts with other component parts. 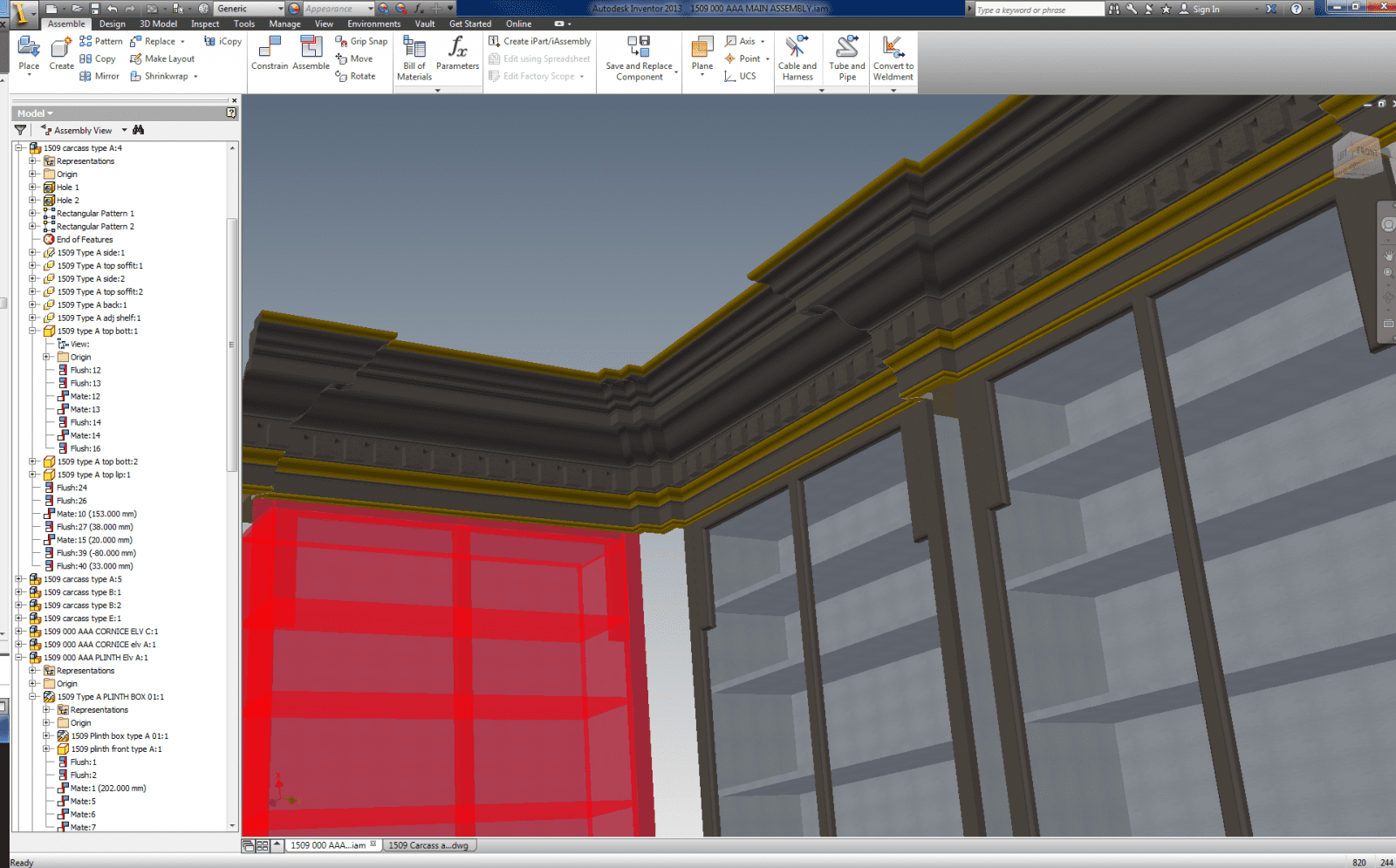 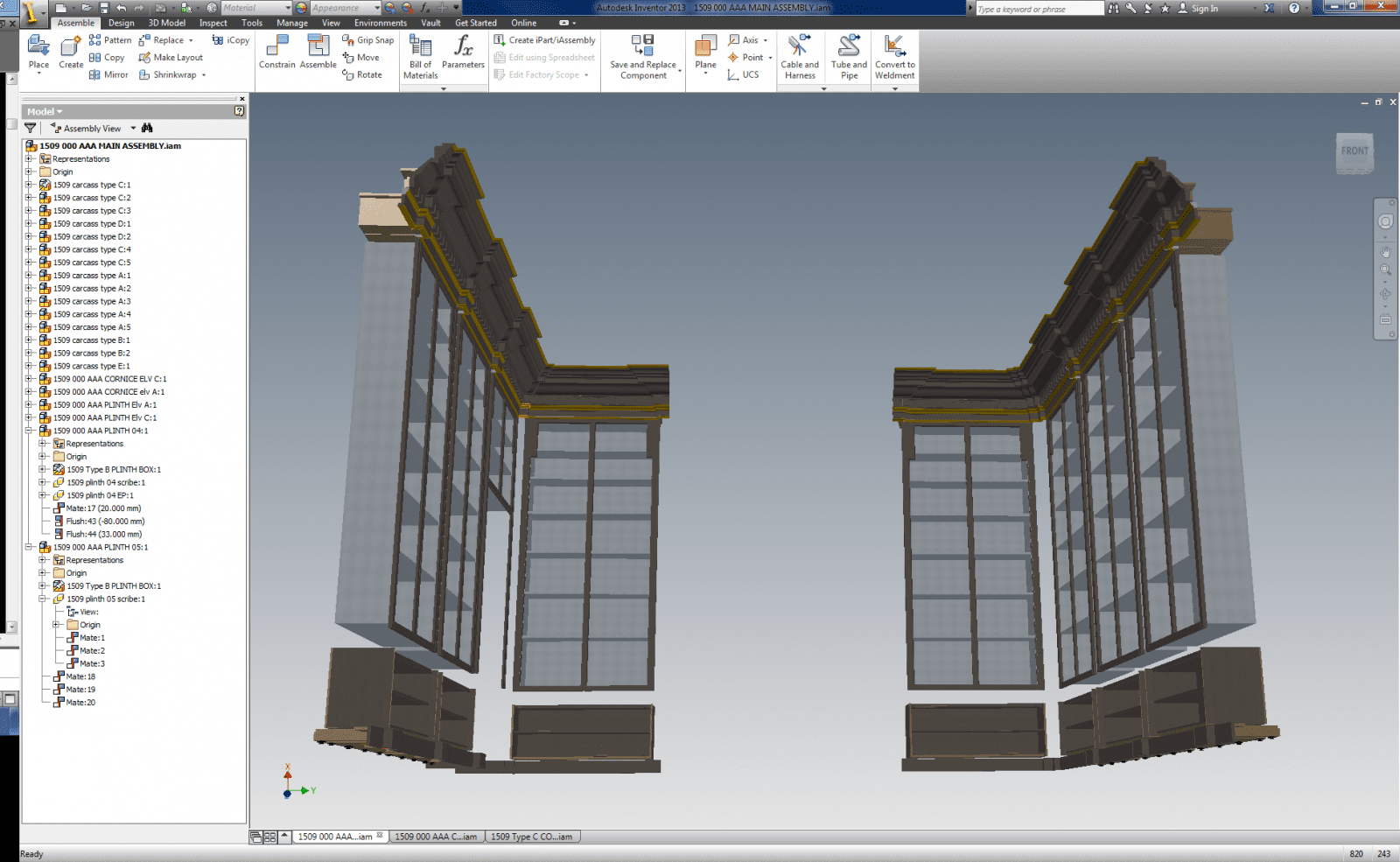 Acanthus leaf carvings ready to be watergilded by the Watergilders team 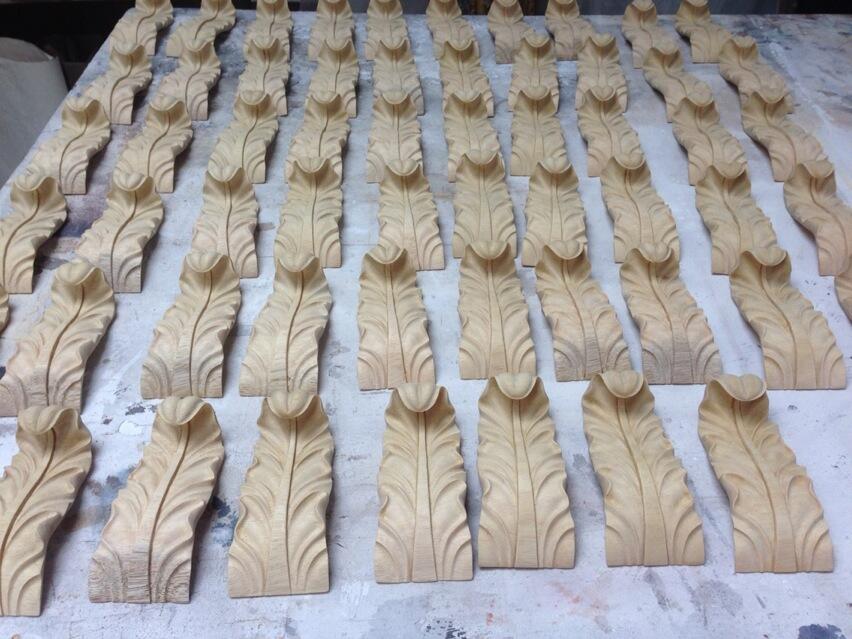 The image below shows the various stages of the water gilding process being undertaken by the water gilders team. Up to ten layers of gesso are added to the timber substrate and smoothed down (bottom right) before a yellow gold gilding clay is added. Burnishing clay, or bole, is then added to parts of the leaf before the gold leaf is added. This is then dampened with water to encourage the leaf to stick to the surface before it is then burnished with an Agate stone. 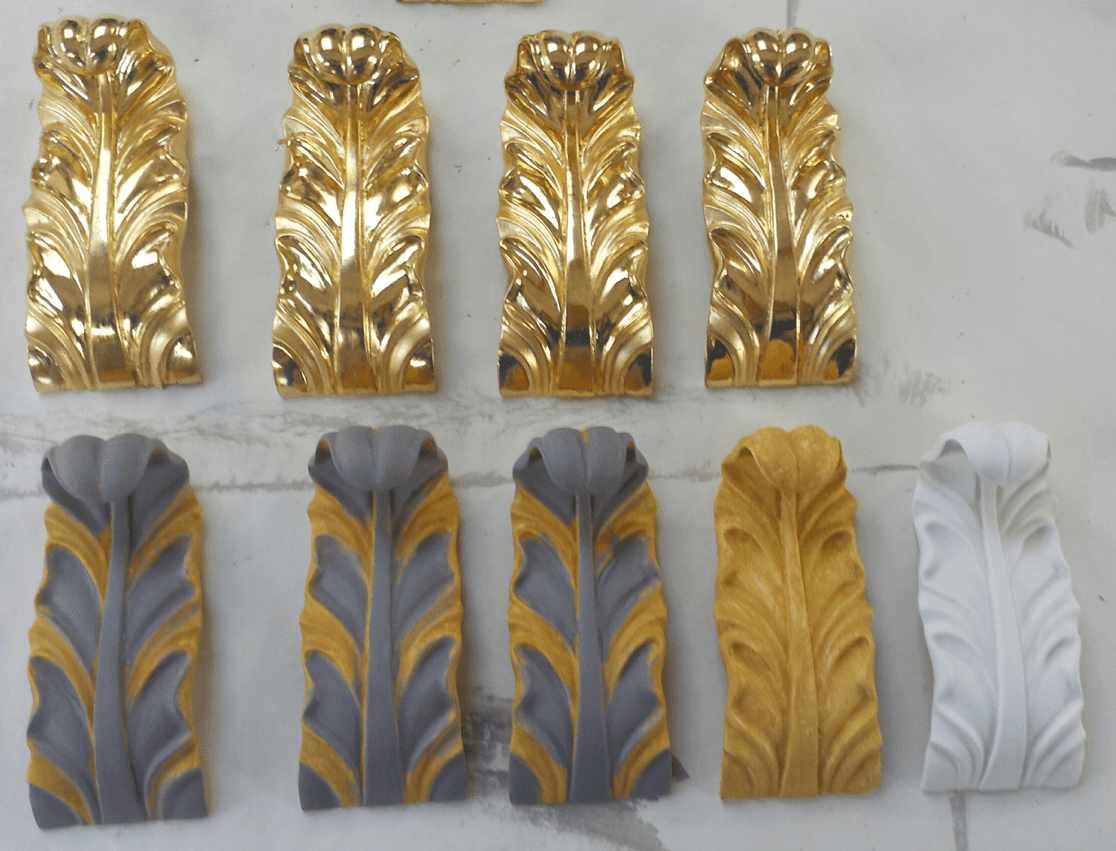 Part of the cornice work in the workshop. The central band of carved lilies will be water gilded. The timber is European Walnut. 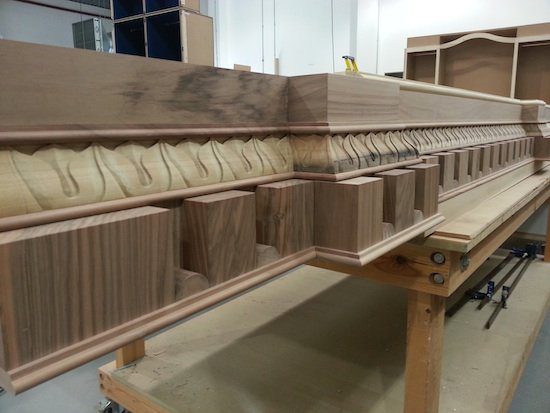 Below are images of the baroque library’s base cabinets in assembly at Artichoke’s workshop with the hinges about to be fitted. Finish has already been applied to the perimeter of the panels which are made from solid walnut. These solid panels will contract in size as the timber acclimatises to the domestic environment. Pre-finishing the edge first allows for the panel to contract within the frame without revealing any unfinished timber at the shrinkage points. 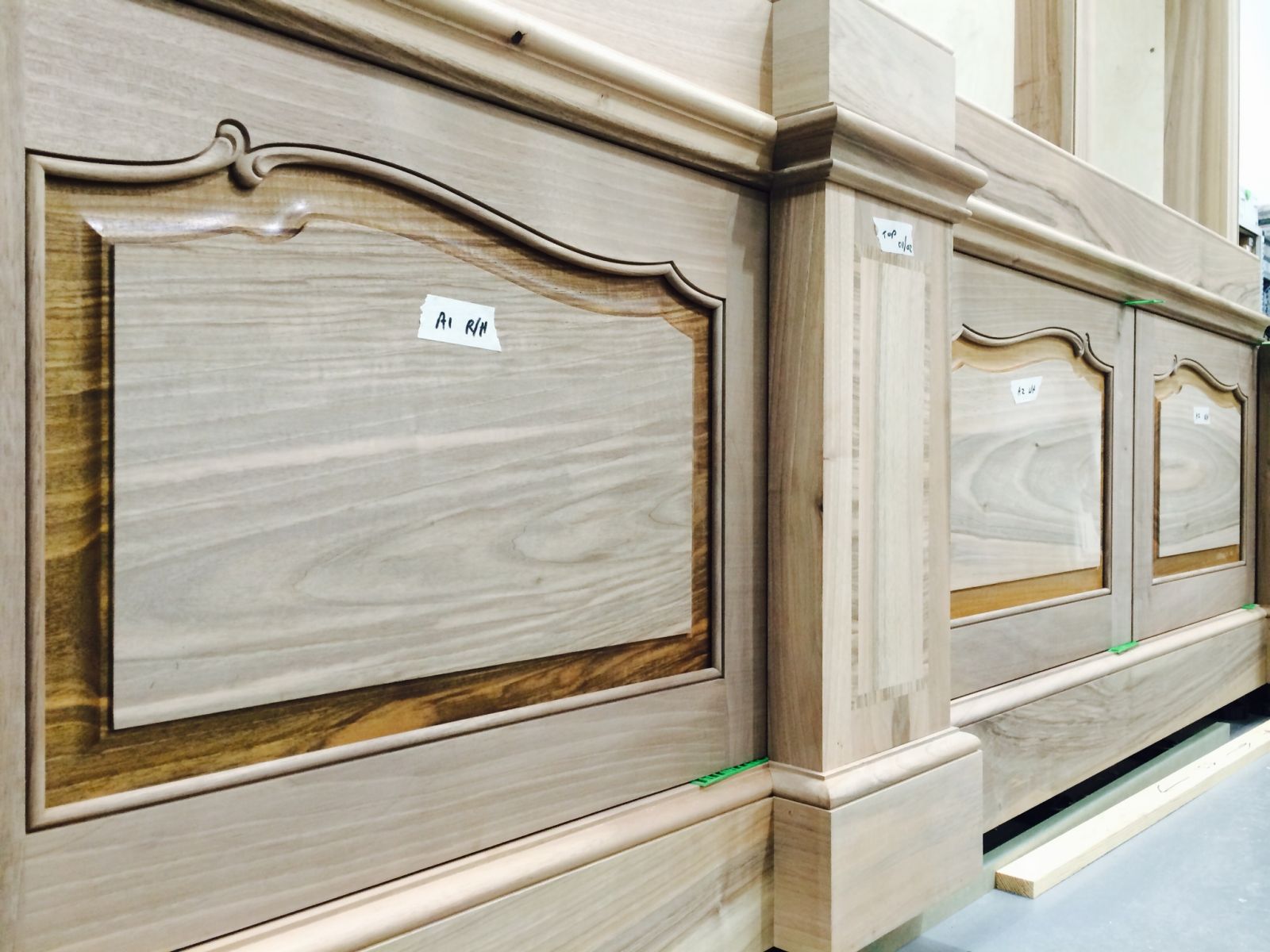 Below are images of the watergilded bases and swags fixed in position. 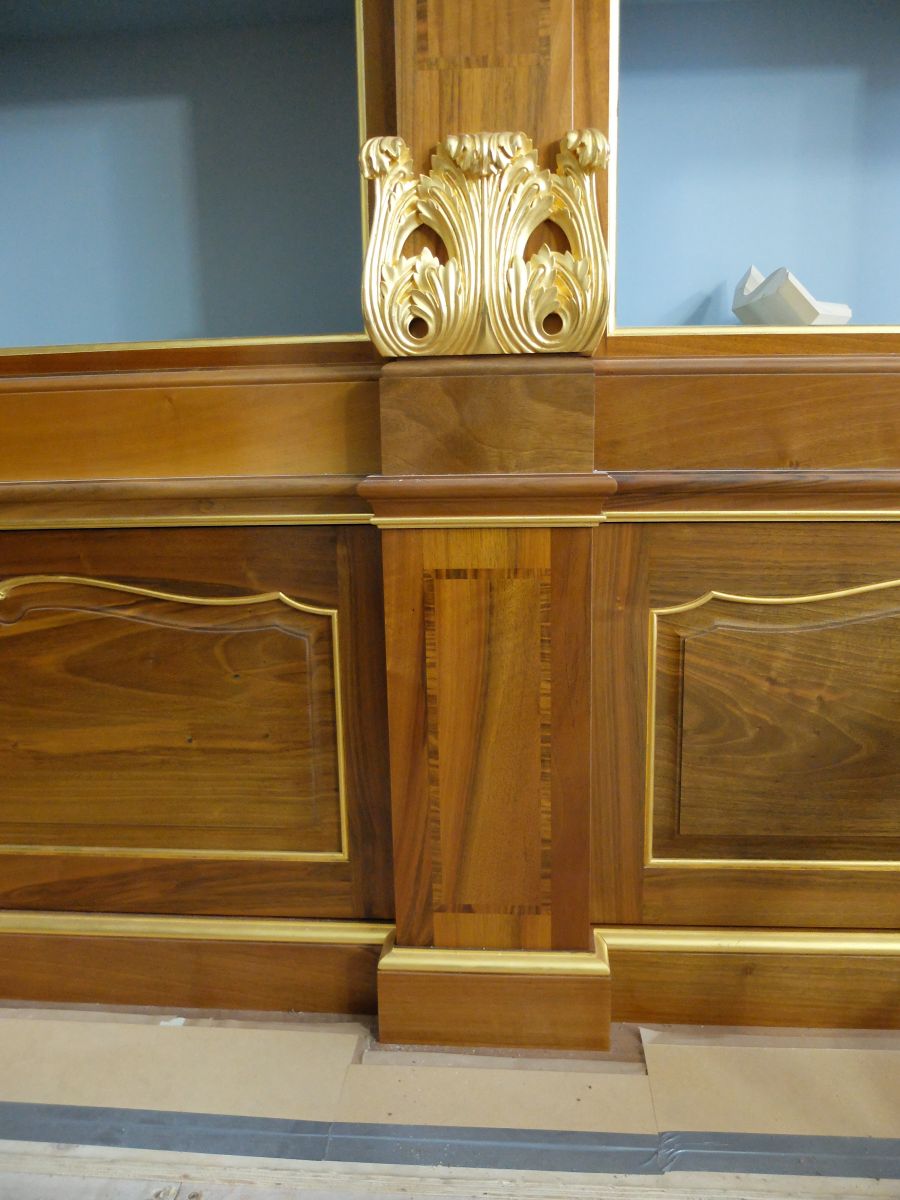 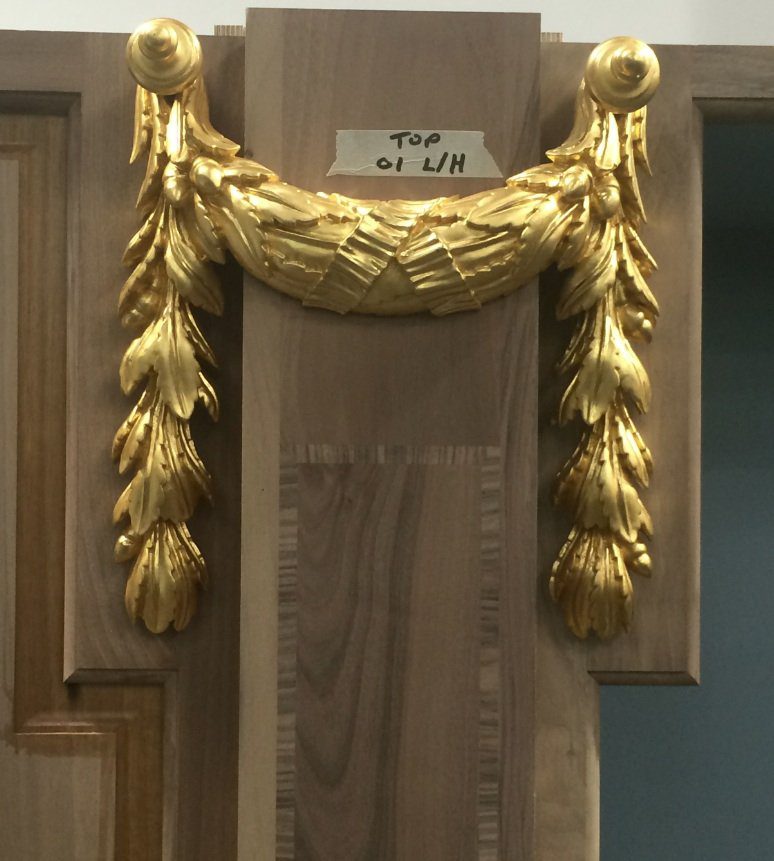 This Video shows the gilders applying oil gild to the walnut frames at Artichoke’s worktops.

Here is the main entrance door to the baroque library, with the frame mould gilded and the raised and fielded panels about to be fixed 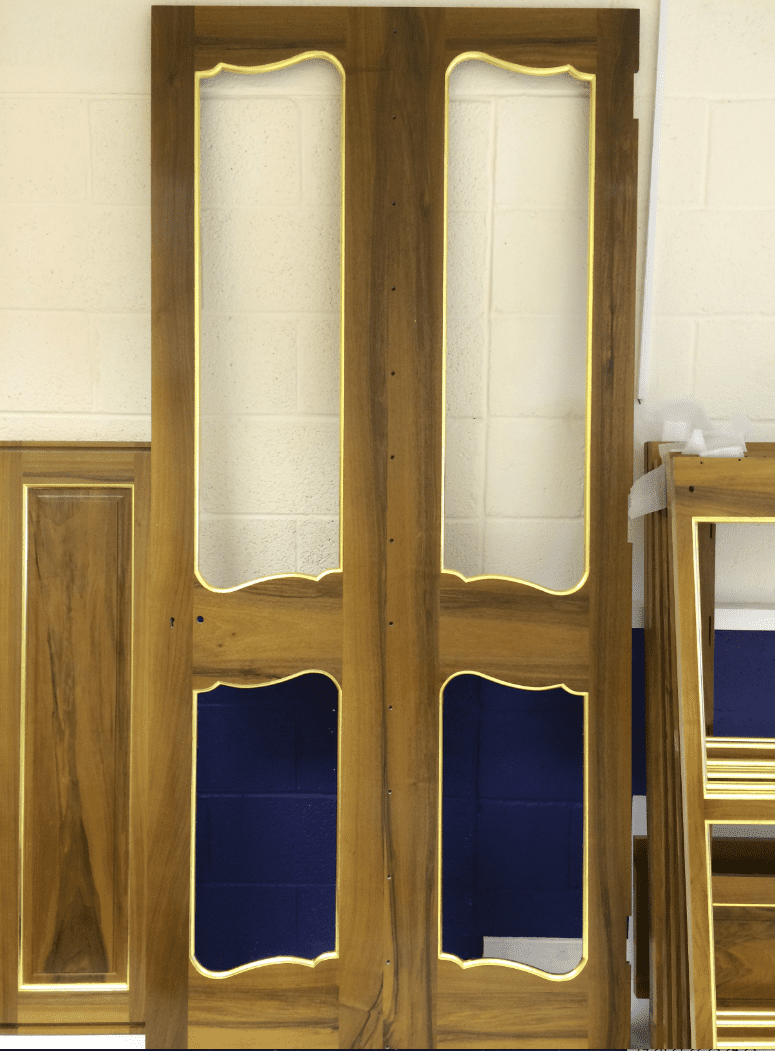 The installation phase of every project is potentially the most risky. A great deal of effort is placed on ensuring that we install at the correct time, and that the environment is not damp, dusty or busy with builders and other third party trades.

Images of the installed baroque library are below: 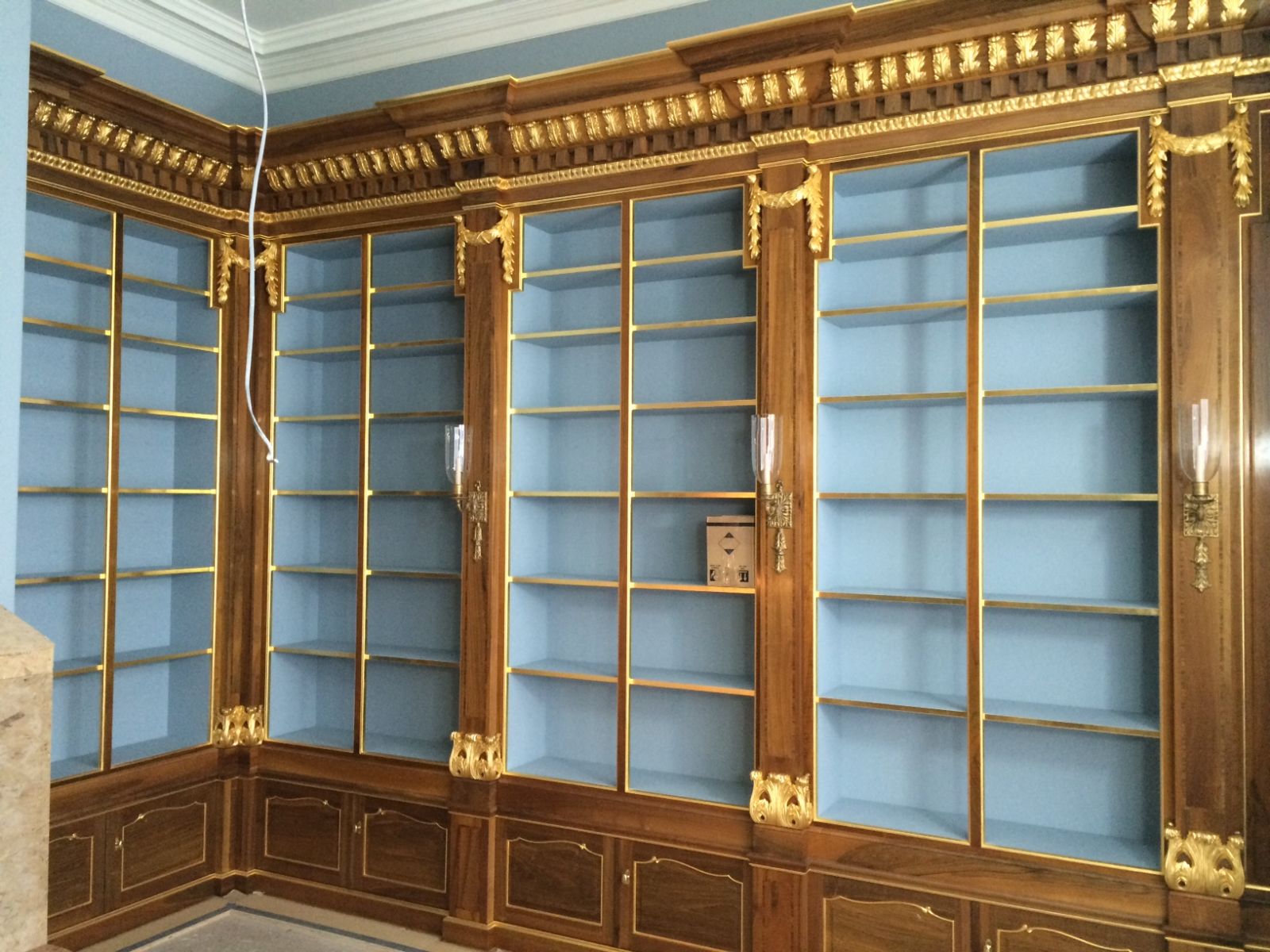 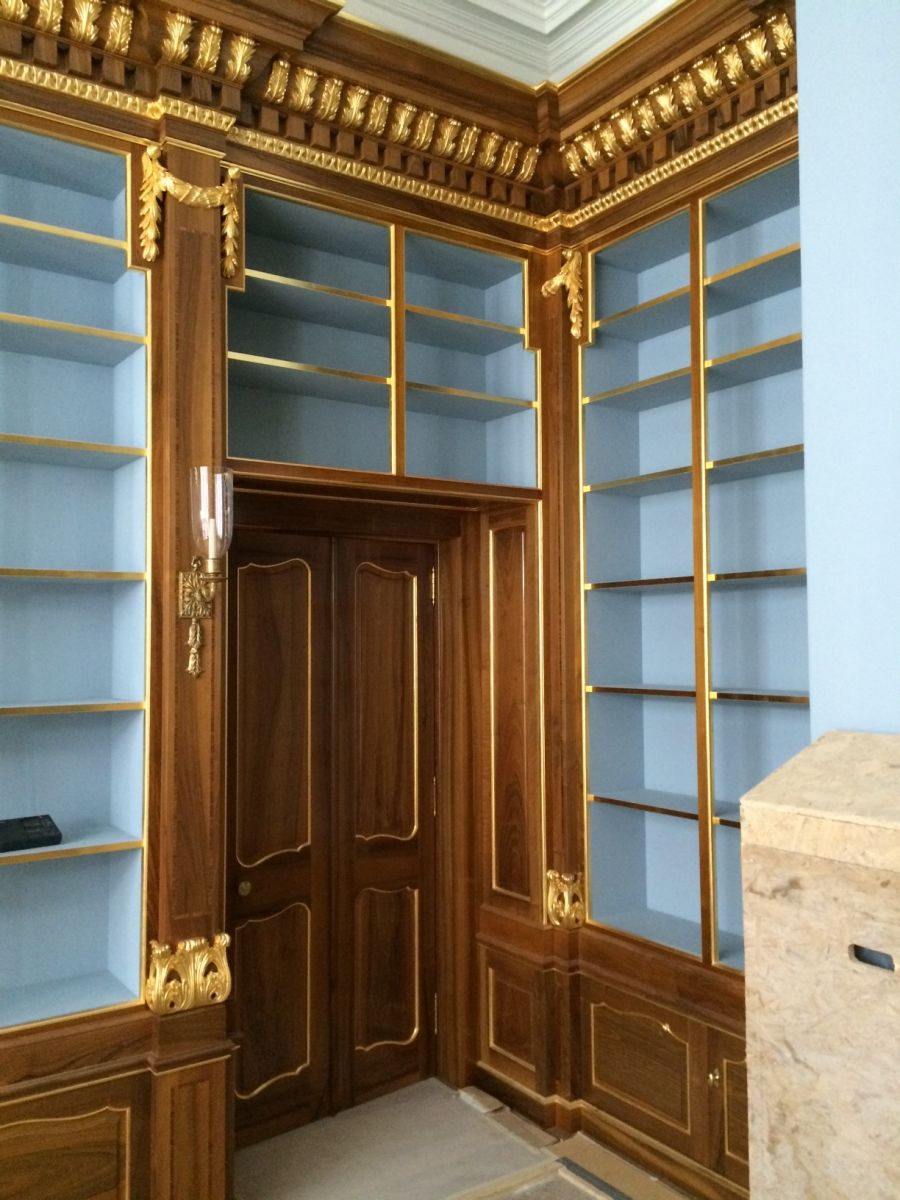 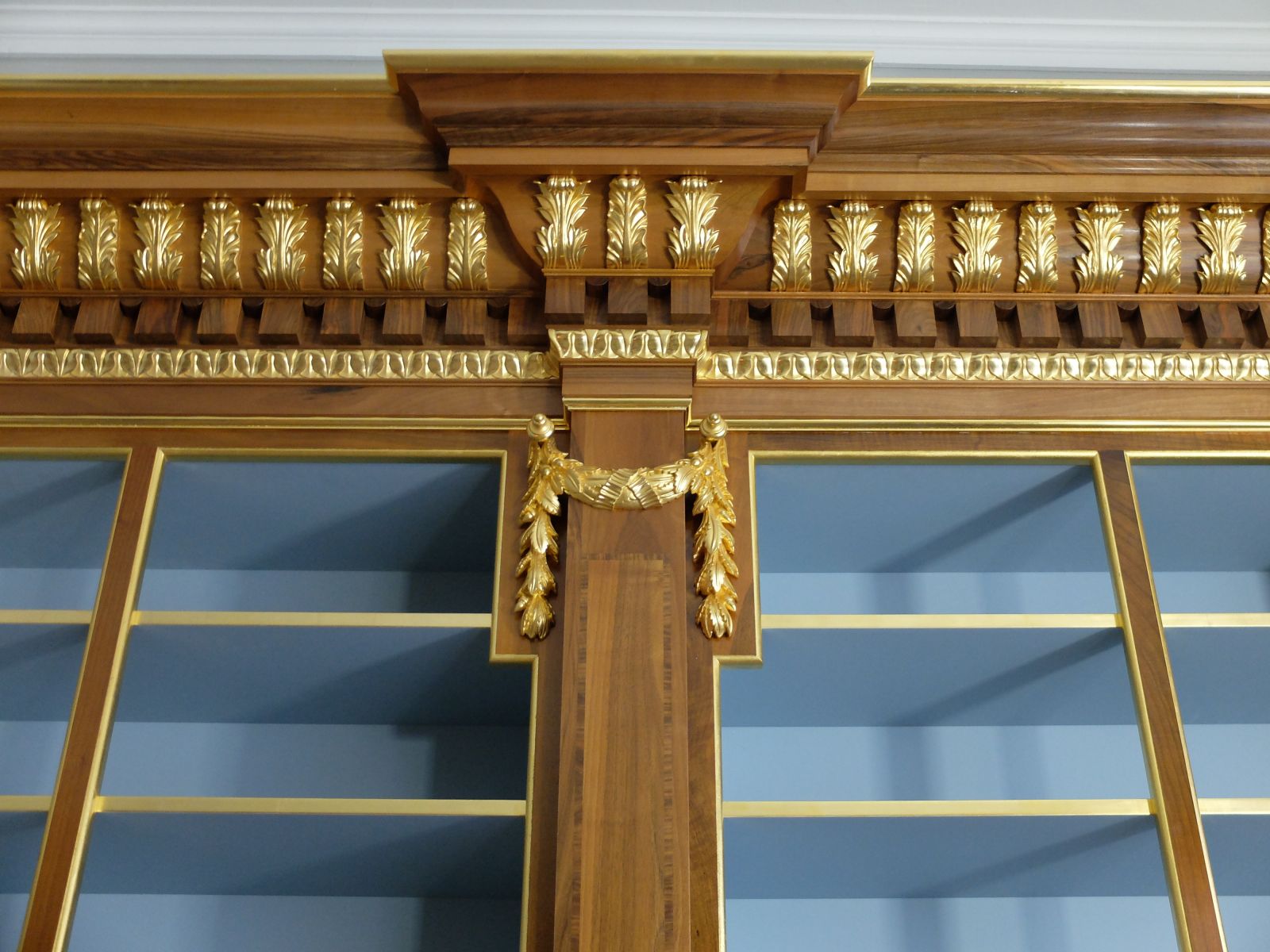 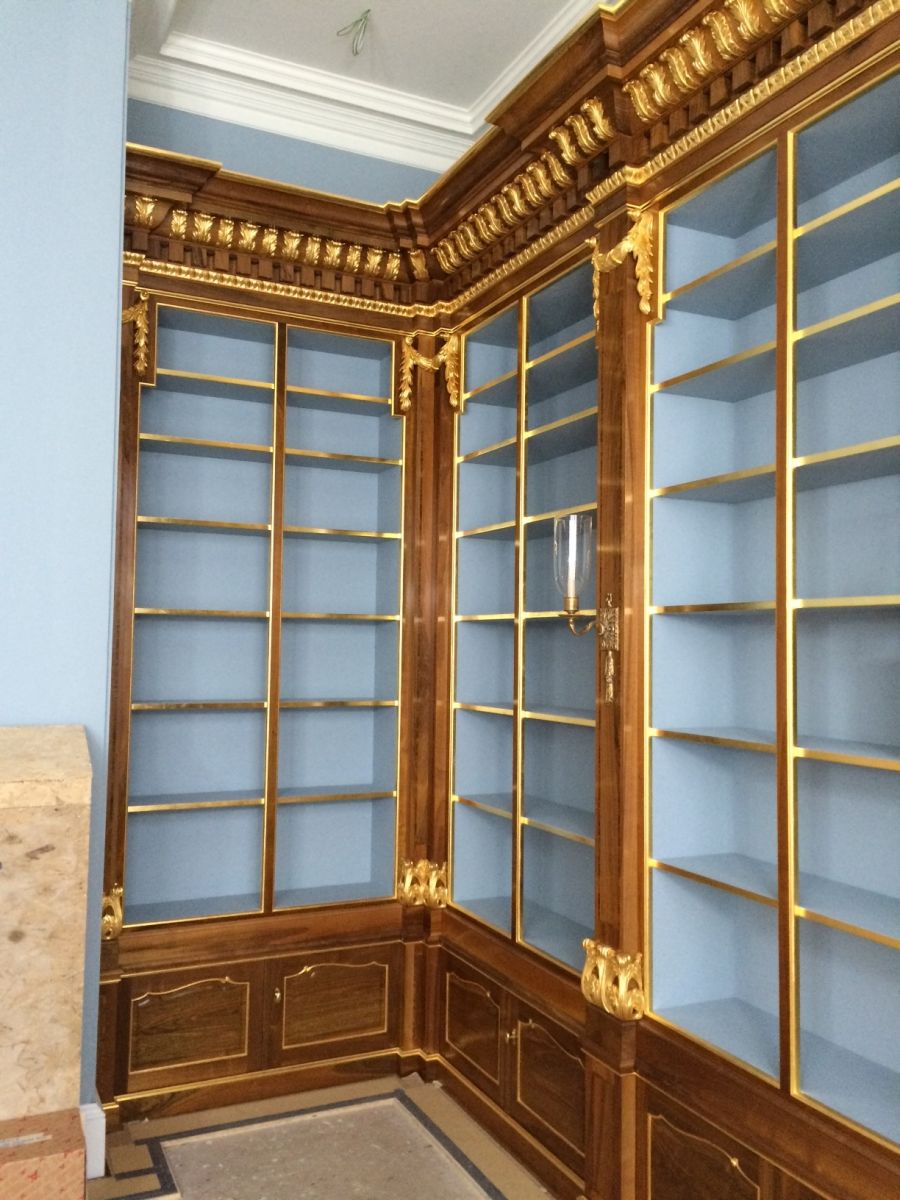 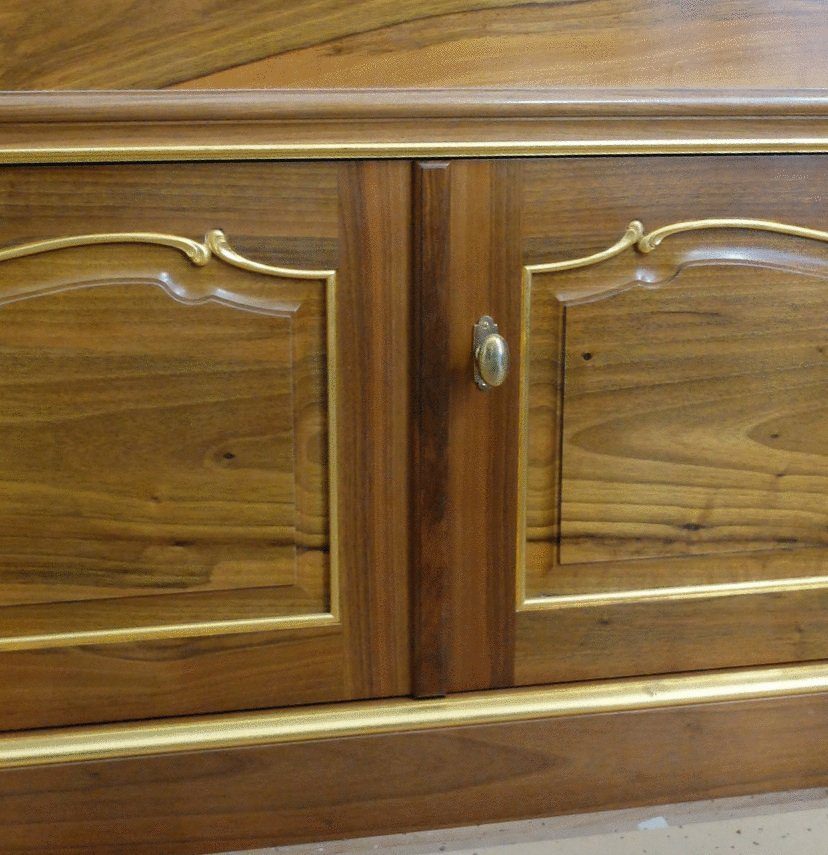 Finally, as a surprise for the client and a thank-you gift to them from us, Artichoke secretly designed in this book operated secret drawer. Every great baroque library should have one!